the rise of an eastern sun.... 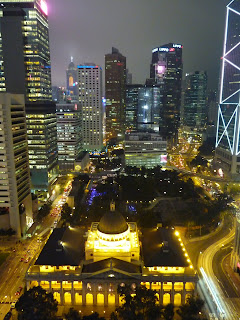 Hong Kong is probably about lots of different things to lots of people.  To me, it’s always going to be about two things: my friend Des and food.  To be honest, even those two things are intrinsically linked in my head.  I first met Des in 1987, and our friendship has largely been defined by the things we have consumed, whether that be coffee and Jaffa Cakes in free periods at school,  turkey rolls filled with mayonnaise and nice n’spicy nik-naks or horrible greasy kebabs from Salmans down the road.  Whatever else we have done in the 23 years we’ve known each other, we’ve certainly not gone hungry.
Hardly surprising then that my time in Hong Kong seems to have largely been spent eating.  In spite of threatening to come many times, this is my first visit.  Like most backpackers, we trudged our weary way off the plane, gathered our rucksacks and got a lift from our host to our five star hotel in Mong Kok in Kowloon. After freshening up underneath our huge rain shower and after a quick power nap on the bed that is wider than I am tall (we have a pillow menu, for goodness sake!), we met up with Des again and headed off to our Michelin starred restaurant with the panoramic view across the harbour to Hong Kong Central.  “Hutong” serves Northern Chinese cuisine (I’m told) and as we gazed out at the stunning (if slightly foggy) view, we were treated to a succession of awesome dishes like razor clams, spicy deep-fried soft-shelled crabs in a basket of chillies, green beans with fried mince pork, carpaccio of octopus, a delicious fatty lamb dish, some noodles.... the dishes kept coming and I kept wolfing them down, each one seemingly more delicate and tasty than the last.
After waking up at 03:30 in the morning thinking that I’d never sleep again, we actually surfaced at something like 11:30, in time for a stroll past the Bruce Lee statue in the avenue of stars, and then onto the Star Ferry to Central to enjoy a sumptuous Dim Sum lunch.  As well as the usual assortment of delicate dumplings, Des decided to try to shock us with a bit of stunt ordering, but the cow’s stomach and chicken’s feet dishes that he ordered failed to curb out appetites and we gamely tried a bit of everything.  I can’t say that either dish is especially to my taste, to be honest: the stomach is too chewy and the feet are mostly skin and bone.... but never let it be said that I’m not prepared to try something before deciding I don’t like it.  Food, anyway.  I’m not shocked easily, and besides, Des has stunt ordered for me before in Chinatown in London.... 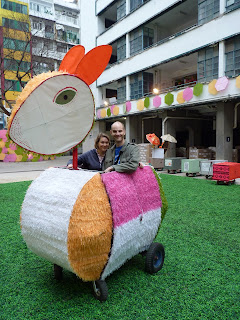 The rest of the afternoon was spent wandering around Central and taking in the sights.  We rode on a tram, we walked around the back streets, we went to an art installation at the old police married quarters, we attended the opening of an exhibition (with wine and cocktails, of course), we had a drink looking out onto the skyscrapers, we marvelled at all of the ex-pats enjoying happy hour with their shockingly young looking asian companions.... but really all of this was just killing time before we made our way to our restaurant for some Peking cuisine.  Again, the food was excellent: we ate Peking Duck, Pork Satay, sweet and sour prawns, a delicate mushroom soup...but the centrepiece of the meal was something called “Beggar’s Chicken”.  This is a dish that apparently needs to be ordered a week in advance, and consists of a chicken stuffed with mushrooms, wrapped in leaves and encased in pastry.  They wheel this out with great ceremony and then someone – guess who – is required to take the ceremonial hammer and to make the first break into the casing.  I got a souvenir photo and a little hammer for my troubles, but the important thing was that the chicken was delicious. 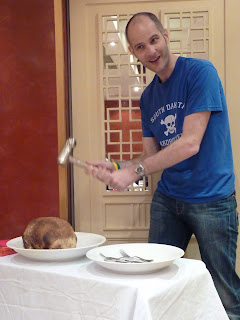 By now, the succession of delicious meals is beginning to blur, and in an attempt to minimise the damage to our waistlines, we manage to sneak some time the next morning to go for a run.  It’s only a 45 minute pootle through the shoppers between Mong Kok and the Avenue of Stars, but it’s better than nothing.  If nothing else, it means that packing my running shoes wasn’t a total waste of time anyway.  Des is playing rugby, so we also have some time to ourselves to take the tram up to the Peak.  I’m sure the views are normally spectacular, but it seems that my luck is out and Hong Kong continues to be enveloped by the same low cloud that hangs over the city for the entire duration of my stay.  To say we can’t see anything would be an exaggeration, but you certainly can’t see much and we feel somewhat vindicated that we didn’t pay extra to go up to the viewing platform (although quite why anybody did on the day we were there is something of a mystery, but the majority of people seemed to be going up there).

We bump into a fat ex-pat at the bottom tram stop, lording it over his visiting friends and telling them how much there is to do at the top.  He’s lying.  Well, unless you like to spend your time poring over tat shops selling overpriced nick-nacks, anyway.  Perhaps he does.  We didn’t get to see much, but I’m still glad that we went, if only because it gave me an opportunity to see on the tram ride up quite how high and steep the peak is, as I certainly couldn’t see it during our stay.  I also got to follow up the good work done on my run by eating a fruit salad.  I don’t know about you, but I like to eat fruit but I often find that on holiday it’s easy to go several days without any.  Now, that’s probably okay for a week or so, but over three months?  Let’s not go there, eh? 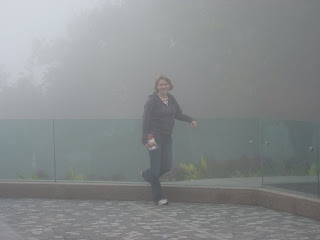 Dinner that night was chez Des.  As you might imagine, it was fantastic:  a selection of raw meats, oysters, mussels, squid, dumplings, scallops and the like that we dipped into a couple of boiling broths in front of us on the table to cook them, then dipped them into a soy sauce and raw egg mix before eating them.  Absolutely delicious – especially when served with a 1982 Chateau Giscours Margaux.   Never mind the dinner though, it was an opportunity to chew the cud with an old friend, his wife and to spend some time with his almost-three-year-old son kicking a ball about and reading him the Gruffalo.  Oh, and England’s first game of the Six Nations with Wales was on the giant screen in the living room too, although the time-zone difference meant that I had to sleep my way through Manchester United vs Portsmouth before kick off at 01:30 Hong Kong time.  It was one of those nights.  I’m sure Hong Kong is splendid, but this is why I’m really here. 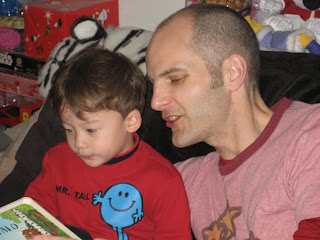 Slow start on Sunday, but it’s pouring with rain, so all we really do with our day is book some stuff for the Tasmania leg of our trip, drink some coffee and drive around a few bits of Hong Kong we haven’t seen.  Food features, obviously, and we have a lovely lunch of noodles, suckling pork, duck, chicken and the like, and a dinner a little way out of town in Sai Kung where we have seafood.  You know the drill: loads of tanks outside a ramshackle looking hut, and we cherry pick the pissing prawns, lobster, scallops blah blah blah that we want to have killed, cooked and served at our table.  It doesn’t get much fresher than that, even though it is hard not to think of the lobster giving you the evil eye as it is plucked from its tank.  Delicious, of course, albeit somewhat greasy as everything seems to be smothered in butter before being served.  We go somewhere else for dessert, of course, and sample some Chinese specialities like a black sesame paste, some almondy-tasting dumplings and some rather slimy but refreshing tofu type stuff.  Trust me, it’s better than it sounds......  and then we’re more or less done. 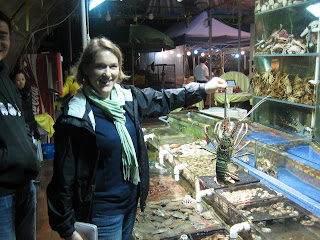 Hong Kong is a shopping town, and we’re not here to shop.  The cityscape is stunning, but for almost all the time we’re here, it’s smothered in low cloud.  None of that matters though.  We’re not here for that stuff, we’re here to stop off and to see some friends. 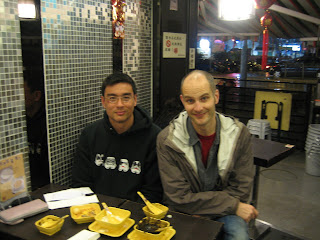 Oh, and I probably ate enough food to last me for the rest of the trip.  A good four days work, I would say.... Thanks entirely to Des, naturally.  Of all the people I know, I think he's the one who has changed the least in all the time we've been friends.  In a good way.  I'll have to find my way back to HK sometime for the Sevens, eh?

(We're actually flying to Hobart today having spent the last three days in Sydney.... but you know, I've got better things to do than sit in a cafe uploading pictures.....I'll catch up as and when I can)
Posted by swisslet at 02:35