One of the things about spending so much of the last few months travelling is that all of your appointments tend to crowd into the few days when you actually are at home.  As we had a ten day gap between our return from Canada and our departure for Thailand, Cambodia and Vietnam, it naturally followed that we spent most of that time running around from pillar to post and very little of it actually at home.  The main reason for that gap was the Test match between England and Pakistan at Trent Bridge, but almost every other day has been filled with various appointments and obligations.  And pub quizzes.  That counts as an obligation, right?

When you've been away for a while, it's actually kind of nice to see your family, and no obligation at all.  We popped down to Buckinghamshire to see my mum and dad, and they are both well.  Whilst we were there (and in no way the main motivation behind our visit....ahem) we also looked in on the cat.... and she looks lean, shiny of coat and generally very comfortable.... perhaps a little too comfortable given that she'll be leaving her country estate next month and heading back to her old patch in Nottingham.  We also made our first trip down to visit my elder brother and his family in Cambridge.  Their youngest is now a few months old and is just starting to make his presence felt, but it was 3 year old Jasmine that really demanded all of Uncle Tim's storytelling attention. 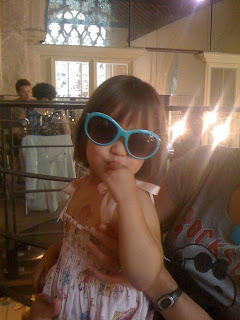 Some of my other obligations have been somewhat less pleasurable.

The need to carry syringes around the place has meant that my multiple sclerosis has never been very far away from my mind wherever in the world we are.  Over the last couple of weeks, however, I've made two separate trips to the hospital to see various specialists.  Appointment number one was to the department of Speech and Language therapy for a swallowing assessment.  This was a follow-up to the problems I had at the back end of May.  Now, I don't know about you, but I imagined that this might involve various cameras and the swallowing of various objects trailing cables.  As it turns out, all I was required to do was to say "buttercupbuttercupbuttercup" a few times and was asked to ingest nothing worse than a glass of water and a digestive biscuit.  Apparently the muscles involved in speech and so on are all fine and I'm being onwardly referred to the department of gastroenterology.  Hmm.

Appointment number two was for my six-monthly check up at the MS clinic.  The NHS has been brilliant since I was formally diagnosed, and this is just the regular punch-in to make sure that I'm okay, to assess the progression of my illness and to make sure that the medication I am on isn't having any kind of negative impacts.  As usual, I was assessed against the EDSS - the expanded disability status scale used to gauge how seriously affected someone is by MS.  This is a chart from 0-10, where 0 is "normal neurological exam" and 10 is "dead due to MS" (although quite why you'd ever feel the need to formally assess someone as "dead" against this scale is somewhat beyond me).  My MS isn't really so bad: my symptoms are worse on some days than others, but basically they're the same as they've always been.  Whilst we've been away, there have been days where I have felt pretty seriously fatigued, but it always seems to pass.  Judging by the waiting room in the hospital, there are certainly people worse affected than me (and the doctor did take the trouble to warn me not to read too far down the scale as I might find it depressing - like I don't know what's further down the chart of possible MS symptoms).  I was duly assessed as a 1, and the doctor reminded me that, whilst I do obviously have some problems, I'm still something of a poster boy around here for leading an active life with MS (indeed, the MS nurse at reception and who took my blood sample recognised me, showing again that one small postcard sent from the Great Barrier Reef can go a long way.....).  Mind you, he also told me that I should think about getting some medication for my fatigue.  I'm reluctant to go on more drugs, but he told me that it wasn't necessarily something I had to take regularly but that might prove useful to have around in case I really need it.  I'm not convinced as I tend to see the fatigue as my body's way of telling me that I'm doing too much.  If I choose to ignore that, then it's up to me, but if I then medicate to artificially boost my energy levels.... I'm not sure that's a good idea.

Anyway.  To cut a long story short, the injections continue and so does the travelling.... for now.  We're off to Bangkok on Thursday morning and are spending the next three weeks travelling around Cambodia and Vietnam before returning to Europe for a quick dash to Vienna and Switzerland.  Grooves, Dark Horse.... we're coming for you.

Then, sadly, it's work.  After another appointment to see the Neuropsychologist, obviously.