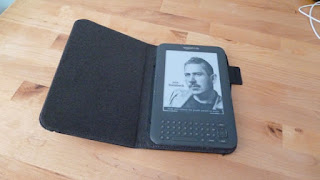 The more that we travelled in the time we were off work, the better we got at packing.  We started out with fairly big bags of stuff and, over the course of the next nine months, slowly worked out what we did and didn't need to carry around with us.  By the time we left for Cambodia and Vietnam in August, we had this down to a pretty fine art and had smaller bags than most people on our trip had day packs.  One thing that remained constant, however, was the proportion of our bags taken up by books.  I'm fairly sure that C's bag for SE Asia probably contained as many books as it did t-shirts, and we didn't even take a guide book.  C. reads all the time whilst we are on the move, but between the two of us, we consume a fair old quantity of reading material.

In Australia, between the two of us, we carried The Magus by John Fowles, Little Dorritt by Charles Dickens, The Brooklyn Follies by Paul Auster, Extremely Loud and Incredibly Close by Jonathan Safran Foer, Interview with a Vampire by Anne Rice, a Charlaine Harris True Blood novel (C's going through a vampire phase, I think.  I blame Twilight), a couple of other paperbacks as well as the Lonely Planet for Australia and the Lonely Planet for New Zealand.  As you might imagine, they took up a fair amount of room and occupied quite a bit of space in the rucksack.  They're heavy too.  You can leave some behind as you go along, but with the best will in the world, even a paperback Dickens is a fairly hefty tome.

I'd been toying with the idea for a little while, but buy the time I got home in August and discovered that Amazon were finally launching a UK version, my mind was made up to buy a kindle.  Pretty much all my travelling was done by then, but the advantages of having an electronic reader that is small, light and can contain more books than a pretty substantial bookshelf had been made pretty clear over the preceding months.

I know that lots of people can't get their heads around e-books and can't imagine ever abandoning the printed word.  Well, you don't have to abandon traditional books, do you?  Just as the advent of the MP3 player hasn't stopped me buying CDs, I don't see that buying a kindle will stop me buying books.  The first book that I bought for my brand new kindle was a 70p version of the book I was already reading -- David Copperfield.  It was great, and 70p didn't seem prohibitively expensive.  I then looked at buying an electronic copy of John Irving's "Last Night In Twisted River", a book that I've owned in hardback since Christmas 2009, but had simply seemed too big to carry around.  The kindle price for that was more than £10, not much more than the hardback edition retailed for on the amazon site, so I decided against it (I see, however, that it is now just under £4....).  I liked the experience.

David Copperfield is quite a big book, and although I liked reading the book and looking at the illustrations and flicking backwards and forwards to the complete list of characters, it was good to be able to have it on a much smaller and more portable format.  The text looked good on the screen too. Unlike an iPad (say), the screen on a kindle is not backlit and you can't read it in the dark.  This means, though, that it is far, far easier on the eye.  The resolution is astonishing.  When I first took the kindle out of the box, I thought it had a protective cover on the screen with a printed image on it and tried to peel it off.  It turned out to be a screensaver on the screen itself (as pictured above).  Reading is a cinch: you can adjust the text size, skip backwards and forwards easily enough, and there's even a built in dictionary that enables you to instantly double-check the meaning of a word as you read.  I was sold, and every book I have read in the last month, I have read on this amazing device (the battery lasts more than 2 weeks, by the way, without switching off wi-fi connectivity or anything).

One big criticism that people have is that this is nothing more than a glorified Amazon shopping basket; that you are tied to buy books from the online retailer in the way that many of us buy our electronic music from the iTunes Store and that this is a BAD THING.  Well, actually I don't really have a problem with iTunes and Amazon has always been my first port of call for online shopping since back in 1999.  Anyway, it's not true.

You might have heard of Project Gutenberg: this is a volunteer effort to digitize and archive cultural works, to "encourage the creation and distribution of eBooks."  Most of the items in its collection are the full texts of public domain books which the project tries to make as free as possible, in open formats that can be used on almost any computer. As of now, they have something like 33, 000 items in its collection, including the complete works of authors like Jane Austen, Charles Dickens, Alexandre Dumas, all of the Brontes, Shakespeare, HG Wells, Oscar Wilde and many, many more.  Much to my delight, I have discovered that it is actually extremely simple to load a book from Project Gutenberg's collection onto my kindle.

1) You open a specific URL on the browser on your kindle.  http://bit.ly/gutmagic
2) This downloads a catalogue of links as a document onto your reader.
3) From this catalogue, you can search for titles you wish to read, and download them directly onto your kindle.
4) um... that's it.

I downloaded Jane Austen's "Emma" and Arthur Conan-Doyle's "A Study In Scarlet" at once, but I will be dipping back regularly to download more classics than you could throw a stick at.  All of them completely free.  That's my plan, anyway.

It's a fantastic device and that discovery just about makes it perfect.  I couldn't be happier (....although C. has been casting covetous eyes at it since day one and, as she's still deep in her vampire phase, is itching to download the latest Charlaine Harris.  That's one christmas present sorted, anyway)

All that stands between me and limitless free classics (assuming I can keep my wife off my reader, of course) is the 500+ page copy of "Matterhorn" by Karl Marlantes that I downloaded the other day.  It's a novel about the Vietnam War.