I'm not religious. You've probably noticed. I am fascinated by religious history and architecture, and studied both extensively as part of my masters degree, but I do not believe in God. This lack of belief does not seem to affect the awe I feel when I look around a Medieval cathedral and feel the centuries of devotion that went into its construction, not does it lessen the respect I feel for people like Martin Luther, Matteo Ricci and Francis Xavier; people whose devotion led them to carry out astonishing things. They believed in God, and their belief drove them to achieve incredible feats. That I do not believe in God does not make those achievements any less impressive.

The US Mid-Term elections and the rise of the Tea Party in the US have brought some loopy Christians to the fore: people like Christine O'Donnell who genuinely seems to believe that masturbation within a marriage is somehow an act of infidelity. This isn't a uniquely American phenomenon either: only the other day, we had reports of groups of Christians outside the Marie Stopes abortion clinic in London, proudly saying how they had talked at least 20 girls into keeping their babies, and that abortion was murder and could never be justified even in cases of rape or incest. We have a growing number of faith-based schools (like those - allegedly - in the Emmanuel Schools Foundation in the North East) who teach that they Bible is literally true and that the world was created in six days a little over 4,000 years ago. It's not so much that I have a problem with children being taught about the theory of Creationism, what's objectionable is that it's presented as of equal value to the theory of Evolution, which is based upon mountains of scientific evidence. Both are theories, sure, but do we seriously believe that they're both equally plausible? Without even touching on their arguments around birth control and homosexuality, I think it's fair to say that some Christians have some pretty objectionable views, at least to my liberal mind.

It is a huge mistake, however, to take the extreme views of a minority and to try to apply them to the majority. I know lots of committed Christians, including my own father and a friend who is in the clergy, and many of the views expressed above would be as abhorrent and irrational to them as they are to me. I must say that I've never really understood why some Christians feel so threatened by Evolution. Why should a belief in God mean that you have to believe in the literal truth of the Bible? Does it really matter if Genesis is literally true, and that the world was created in six days, or if it evolved slowly over hundreds of millions of years? If you believe in an all-powerful, all-seeing deity, could you not stretch to see evolution as part of His ineffable plan? People always like to quote Leviticus, of course, as being literally true: man shall not lie with another man and all that (Leviticus 18:22). But then again "Do not cut the hair at the sides of your head or clip off the edges of your beard." (Leviticus 19:27) or "They (shellfish) shall be an abomination to you; you shall not eat their flesh, but you shall regard their carcasses as an abomination." (Leviticus 11:11). If we're not supposed to tolerate (male) homosexuality (no mention of woman lying with another woman, you'll notice), are we also supposed to stop shaving and never eat prawns?

Anyway. Most of the Christians I know are as rational as you or me, in some cases much more so. They just choose to believe in God and I choose not to. They don't try and force God on me, and I don't try and force my atheism on them. I like and respect them and their beliefs, and I hope they do the same for me and mine.

Which brings me to this.

You're probably familiar with the Ichthys: the fish symbol that people display on their cars as a symbol of their Christianity (sometimes with the word "Jesus" in the middle)

I've just got myself one of these. 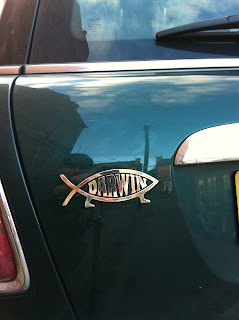 C. spotted one on another car, and it made us both laugh, so I looked them up and bought one for myself.  It's a fish with feet and the word "Darwin" in the middle. It's playful, for sure, as it's clearly a parody of the Ichthys, but all it is intended to do is to publically display that I believe in evolution (I'd love to think that goes without saying, but apparently it doesn't any more). I'm proud (probably to a fault) about my rationality, and I'm not ashamed to display it. Together with my other car sticker, it's also a pretty public display of my atheism. I don't have a problem with people who do have a religion as long as they don't try and force their beliefs down anyone else's throat. I trust they will do me the same courtesy. Plus, it makes me laugh and -- judging by the reactions I've had so far -- it makes my fellow drivers laugh too. People talk about the rise of a new and vocal group of atheists (the Catholic church was full of it when the Pope visited the other day, but apparently the Jehovah's Witnesses are also -- somewhat ironically -- doorstepping people about it). Pretty much by their very definition, you'll struggle to organise atheists into anything other than the most amorphous grouping. It would be like herding cats. Like religion, atheism is an individual choice. Just as people are free to believe, we are also free to not believe. My lack of belief is not threatened by your belief; can you say the same? 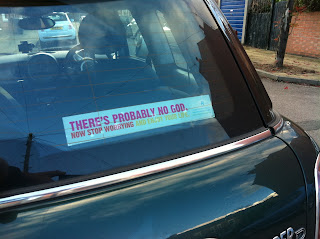 There's due to be a census in 2011. In 2001, along with something like 390,000 other people (more than said they were Sikhs, Jews or Buddhists), I marked in the religion box that I was a "Jedi". It was funny, but apparently we can all either be safely excluded from analysis or - even worse - marked down as having some kind religious belief. This time around, I am going to be ticking the "No Religion" box. I unambiguously want to be recorded as not having a religion of any kind. These numbers are used to justify things like funding for faith based education, and though I have no kids, I want no part of that.
Posted by swisslet at 19:23