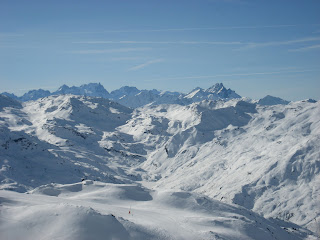 Well, we're back.  Seven days spent skiing in the glorious sunshine of the Three Valleys in France.  And eating.  Mainly eating, truth be told.... mostly dishes made with cream and cheese and bursting with carbohydrate laden goodness.  Mmmm.  You can't beat a good tartiflette to warm you up and send you back out onto the slopes with a healthy glow and ready for an afternoon of skiing.  Well, it's either the food or it's that or a carafe of red wine. 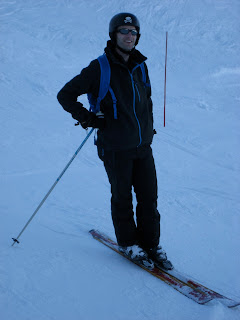 Look, I know that most of the photos are going to look the same as the skiing photos I put up every year.... snowy mountains, me on skis..... but I'm going to put them up anyway.  At least I've got a new jacket this year, accessorised, I hope you'll notice, by a matching rucksack and a blue belt that really helps to tie the room together. 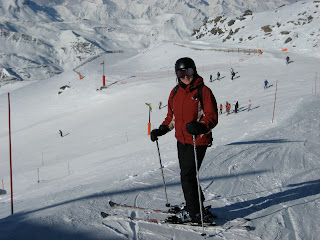 It didn't snow much when we were there, but one of the advantages of being in a resort as well developed as La Tania and the rest of the Three Valleys is that they know how to use the snow they have.  The piste was packed and hard, and sometimes made for challenging skiing, but it wasn't really icy and if there wasn't much powder about, at least it wasn't too brown or stony anywhere. 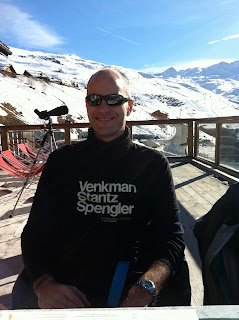 It was cold too.  It was nice enough on a sunny terrace, but out on the mountain itself, it seemed to get colder and colder as the week went on.  We only had one afternoon when the cloud closed in, but as we were waiting to get onto the cable that went up Caron in Val Thorens, we saw that the temperature was -17.  Needless to say, 1000m further up the mountain, at 3200m, it was colder still.   It was a lovely view and a good ski down, but nobody wants to hang around when they can't feel their feet or their hands and are worrying that their nose might be about to drop off. 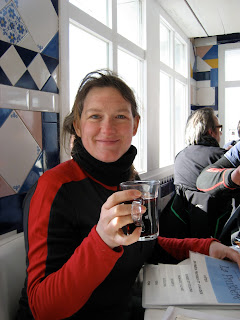 Still, it's not as though we need much of an excuse to stop for a vin chaud, and it just so happened that we had a restaurant recommendation nearby.  You know you're onto a good thing when you order a plate of three Savoyarde cheeses and the waitress delivers it with a whisper, "I've given you four cheeses!". 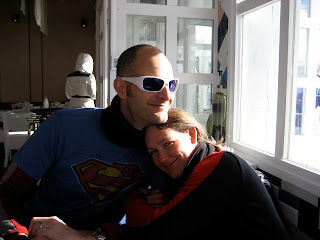 She called me "Superman" too.  I think C, was unimpressed.  I swear I didn't say a word to her beyond ordering my lunch.  She was just being friendly.  Honestly. 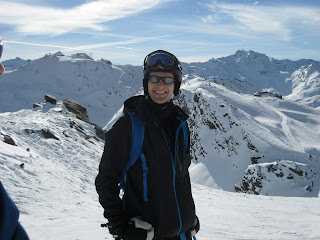 Another good week of skiing then.  And eating.  And drinking.  A good week with some good company.  Exactly 12 months ago, our ski trip was the start of 9 months off work and travelling around the world.  That was fantastic, but I can honestly say that I didn't have the slightest worry about going back to work this morning.  Either I'm super-relaxed, loving my job or my perspectives have shifted a little in the last year.

Maybe it's all three.

The cat was pleased to see us when we got home though.  I don't think she likes the cat hotel....
Posted by swisslet at 19:36