my death waits among the falling leaves...

The BBC screened a documentary yesterday in which the renowned author, Terry Pratchett, investigated the issue of “Choosing to Die”. Pratchett himself is suffering from early-onset Alzheimers, so this is clearly a subject very close to his heart. Amongst the issues raised, the programme has stirred controversy by showing footage of Peter Smedley taking a lethal dose of barbiturates at the Dignitas clinic in Switzerland and then dying on camera, peacefully and alongside his wife.  If you didn't see it, then I urge you to watch it on iPlayer.  It is intensely moving and had me in tears, mostly at the amazing grace and dignity being shown by the Smedleys in the most extraordinary of circumstances.  They were so, well.... British about the whole thing.  How ridiculous that they had to travel to Switzerland and didn't have the right to do this in their own home. 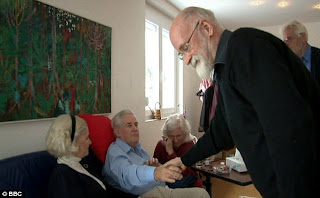 The final moments.
As Pratchett himself said on Newsnight after the programme, "I believe it should be possible for someone stricken with a serious and ultimately fatal illness to choose to die peacefully with medical help, rather than suffer," he told BBC's Newsnight. Asked about the sanctity of life, Pratchett responded: "What about the dignity of life?"
As the Guardian reports, the backlash has not been slow in coming and the BBC has received hundreds of complaints for showing the programme at all:

""Campaigners accused the BBC of helping to promote assisted dying and of consistently portraying the practice favourably.  Writing on the Christian Concern website, Nazir-Ali [ST's note: a former bishop, apparently...] said: "Real life is quite different from Sir Terry's science fiction ... The Judaeo-Christian tradition is a surer guide. 'Thou shalt not kill' is about acknowledging the gift and dignity of human life which, whether ours or another's, we do not have the competence to take."  Care Not Killing (CNK)'s campaign director, Dr Peter Saunders said: "This latest move by the BBC is a disgraceful use of licence-payers' money and further evidence of a blatant campaigning stance. The corporation has now produced five documentaries or docudramas since 2008 portraying assisted suicide in a positive light. Where are the balancing programmes showing the benefits of palliative care, promoting investment on social support for vulnerable people or highlighting the great dangers of legalisation which have convinced parliaments in Australia, France, Canada, Scotland and the US to resist any change in the law in the last 12 months alone?"

These are not simple issues, and striving to find a black and white answer in these murky waters is always going to be difficult, if not impossible. Two things are clear to me though: the first is that, as an atheist, I find it very hard to take the views of many religious people on this issue seriously, although I envy them their certainty. Quite how that programme could be seen as "propaganda" is beyond me.  Who has a vested interest in allowing people to choose to die with as much dignity as they can muster?  The second thing that I am sure of after watching the programme is that I want to have the right to decide, if it comes to it, to end my life.

I suffer from multiple sclerosis, and on a very basic level, I find it quite upsetting to see people with the same condition on the television discussing their right to choose to end their lives. Pratchett’s programme followed one such guy, Andrew Colgan, described in the Guardian’s TV review like this:

"Andrew has multiple sclerosis which, though he seems disturbingly OK, he describes as 'like walking down an alley that's getting narrower, with no doors.'"

Leaving aside the casually ignorant remark that he “seems ok”, it sends shivers down my spine to contemplate that someone with MY condition can be driven to the point of wanting to end their own life. I’m nowhere near that point, of course, and I may never be…. But the fact remains that it is a possible future for me. Debbie Purdey is another MS sufferer who has campaigned for many years for clarity in the law so that she can be certain that her husband would be free from prosecution if he helps her get to Switzerland to end her life.

She was on the radio this morning talking about the programme and some of the issues it raised. She was forced clarify that MS is not – as people have been saying – a terminal condition, but it is a condition that can lead people to want to end their own lives rather than to continue to suffer. She mentioned the remarkable statistic that people with MS in Denmark are 2.5 times more likely to kill themselves than a member of the “normal” population. In Canada, the figure for people with MS under the regular care of a neurologist (i.e. presumably more advanced cases, although actually in the UK that would include almost everyone) rises to 7.5 times more likely to kill yourself. We don’t have comparable statistics for that in the UK, but that is an amazing and terrifying thought…. That people with MS are far, far more likely than average to be driven to a point where death is preferable to living.

It’s pointless to dwell on what might never happen, but at the same time, if it does happen to me, I absolutely want to have the right to end it all and not have some politician or cleric telling me what is right and what is wrong. It’s not up to them. It’s not their life.  I was reading today that a good way to think about a law is to think of its opposite: so instead of thinking about changing the law to allow people to choose to die, what if they were changing it to prevent you from doing the same?  Does that seem like more or less of a violation of your rights?  I think that if the right to die was already enshrined in law then we would think it a ridiculous idea to take it away.  If that's true, then it's a short leap from there to making it legal, isn't it?

A couple of my colleagues were laughing today when we were talking about this, joking that they knew I’d have an opinion on this, but that unfortunately they didn’t have all day to spare to listen to it. Hahaha. I have multiple sclerosis: I have to think about things like this. These kind of decisions might be in your future too, but they’re more likely to be in mine. Of COURSE I’ve got an opinion on it*.