You know how I was whining the other day about how my stupid body was falling apart?  No?  Well quick recap: my knee hurts, my calves cramp and now the tendon under my left foot has flared up and I feel like I'm walking across a knife blade first thing in the morning.

The sensible thing to do would probably be to stop running.

But we all know I'm not sensible, so that's not going to happen any time soon (I hope).  In fact, I'm training for a half marathon that I haven't even been able to bring myself to formally enter yet, as if not actually entering is going to stop me already being about halfway through the training already.  As if it's a possibility that I won't be entering at some point.  Anyway.  I have counter-measures: I roll my calves on a big foam roller to ease the cramps and stiffness out of the muscles before and after exercise; I also have a wooden ball that I roll under the plantar fascia tendon of my left foot.  It hurts like hell, but apparently it helps loosen out the stiffness and shortening of the tendon that is causing the pain.  I also have a whole series of lunges and stretches that are supposed to help, not to mention the specially moulded insoles I wear in my running shoes.

I now have a new addition to my arsenal of remedies. 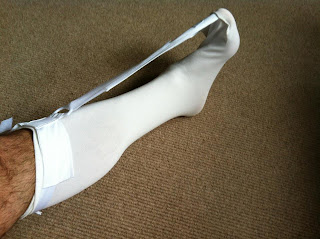 Actually, it's called a Strassburg Sock.  The idea is that you wear it overnight and it keeps the tendon in your foot gently stretched to prevent it contracting.... it's that contraction that causes most of the pain.  It looks ridiculous, I agree, but it seems to be helping.

I also went to the doctor today to chase a letter from my physiotherapist suggesting he refer me to see a consultant.  That was May, and naturally he's done nothing about it, so I went to see him to give him a prod to get wheels in motion.  They'd scanned the letter into my patient records but not actually done anything else about it.

We've got my mother-in-law staying at the moment, and as I was discussing this whole sorry saga with her, she asked what I would do if the consultant told me to stop running.  I ducked the question... and she noticed and asked me again.

Nobody can say with any certainty what MS will do to me over time, but I've known all along that there may come a time when I'm not able to run.  I've always said, that when that time comes, I'd simply find something I could do and would get on with that without looking back.  Until then, I'd keep running as much as I can.

What else can you do?  If it happens, it happens and I'll worry about it then.

To be honest, I was thinking more that I'd lose the use of one of my legs or that I would be overcome with fatigue or something like that.  I hadn't really considered that MS might affect me more subtly, more insidiously, and that a single symptom - the slight dropping of my left leg when I get tired - could lead to mechanical problems that are slowly making it harder and harder for me to run.  Somehow, it feels all the worse that I can run through all the numbness and pins and needles and the fatigue, but that something mechanical might just stop me.

I run because I can.  When I can't, I'm really going to feel as though I've lost something.  Perhaps I'll find something else to replace it: cycling, swimming.... anything.... and I'm sure I'll adjust.... but I don't really want to think that far into the future until it actually happens.  I've learned not to plan too far ahead.  Running is getting harder, but I'm 38 years old now and it was hardly likely to be getting any easier, was it?  I can still run.  It hurts a bit, but knee problems and plantar fasciitis are hardly unusual problems amongst runners.

So, I'll roll my calves and my foot, I'll do my squats and lunges, I'll ice my tendon after exercise and I'll wear my stupid damn sock.  In short, I will not give up without a fight.  I'm a runner.  We run.

Anyway.  That sock is kinda sexy, no?  Y'all been reading "50 Shades of Grey", so I guess you ladies are all into this kind of thing now anyway, right?
Posted by swisslet at 19:05