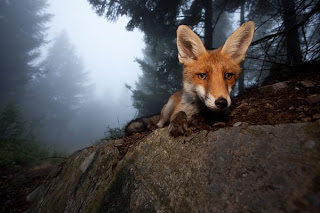 In the small hours of Saturday morning, we were awoken by a strange noise.  For a moment, I thought it might be a cat fight, but as I lay in bed and listened, I realised that the noise was more of a kind of bark/whine and was far more likely to be coming from a fox.

I like foxes.  We used to have loads of them around here, and I have a very fond memory of the time when I sat by the ground floor window of my bedroom in a shared house and watched two fox cubs playing on a flattened cardboard box right underneath me as their mother watched me closely from the bottom of the garden.

It was a magical few minutes.

We don't see them so often any more.  The council switched to wheelie bins a few years ago now, and I guess their food supplies just dried up now that we don't have bin bags piled out in the street.  I don't suppose anyone misses the mess, but even so, it's almost a shame.  I used to love watching them running up and down the streets in the middle of the night or if you bumped into one first thing in the morning.  I don't know about you, but I love these little glimpses of nature in our man-made world.

On Saturday morning, I got out of bed to peek out of my window, and in the dawn light, I saw a young fox just on the other side of the street.  He was fussing over something and letting out these strange little yelping whines.  I watched for a while and saw that he was playing with something that looked like a ball.... then it dawned on me: he had a hedgehog.  I had no idea we had any hedgehogs around here.  Not surprisingly, the hedgehog had rolled up into a ball, and the young fox was experiencing the pain and frustration of trying to bury his nose into the spikes as he tried to find a way in.  He looked like he wasn't having any luck, and he gave up once, but soon came trotting back to have another go.  A few minutes later, he gave up for good and trotted off down the street as if he had other urgent business that required his immediate attention.

I watched for a bit longer to see if the hedgehog uncurled himself and wandered off, but he seemed reluctant to move until he was quite sure the coast was clear... and who could blame him? I pulled the curtain back and went back to bed.

Next morning, the hedgehog was still there.  I popped out for a closer look and saw that he was still curled up in a ball, but he was missing his head.  He'd frustrated the fox, but for him is was no more than a pyrrhic victory.

As I watched that scuffle in the early morning light, I had a quick look around for my cat. If all the noise had woken me up, she was hardly likely to have ignored such a noise on her territory and was bound to have gone to investigate.  Sure enough, she was nowhere to be seen.  I should imagine a fox would know better than to tangle with the spitting ball of muscle, claws and fury that is an angry cat, and I also would think that most cats are smart enough to stay out of the way of a hungry fox.  Mind you, our cat is not the shiniest pebble on the beach, bless her....you never know what's going through her little head.  As she was nowhere to be seen, I imagine that she was watching the whole thing from a distance and a safe vantage point off the ground with BIG eyes. 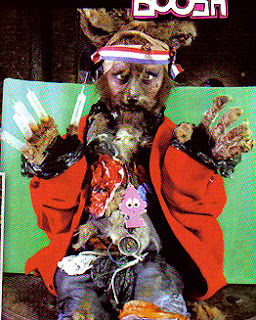 You can't trust these foxes, you know. As any fule kno.
Posted by swisslet at 20:15

Email ThisBlogThis!Share to TwitterShare to FacebookShare to Pinterest
Labels: cat, the natural world