I'm treading water there before I drown.... 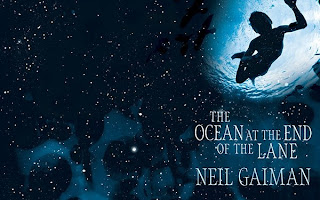 You know how I was saying earlier this week that I hadn't been reading much, but I thought that I was unblocked?  Well, I read a 280 page book in a single sitting last night.  I think that confirms the end of my dry spell, don't you?

The book in question was Neil Gaiman's new one, "The Ocean at the End of the Lane".

By the time I finished it as around 11pm last night, there were tears streaming down my face.  Wonderful, happy tears as I experienced that bittersweet feeling you get when you finish a really good book.

I think I first discovered Neil Gaiman's writing in around 1990 when he collaborated with Terry Pratchett on "Good Omens".  I was already a big fan of the Discworld series, but this was something else.  I loved it.  Gaiman was also writing the "Sandman" series of comics at the time, but I wouldn't discover them and his novels until much later.  He's a wonderful writer and he seems to have a boundless imagination.  All of his books seem to exist in a world where magic and the supernatural are a consistent undercurrent to normal life  He is also well versed in myths, legends and folk tales and is happy to weave them into his writing.  Many of his books are aimed at a younger audience, but like Roald Dahl, he understands that children are far less squeamish about horrible things than their parents, and some of his work is really quite horrific: take the button eyes of the Other Mother in "Coraline" or the slaughter of Nobody Owens' family in "The Graveyard Book".  He also writes a mean short story, and I love a good short story... especially the one about the cat that fights the devil every night to protect a family ("The Price" - read it here).

Actually, my favourite of his books was aimed at adults - "American Gods".  Again, for me it's the way that he weaves Norse mythology and ancient magic into a setting in the modern day USA.  "The Ocean at the End of the Lane" is aimed at adults too, although it's a story of childhood seen through adult eyes.  It's beautiful.  I won't put any plot spoilers up here, but even though Gaiman is touching themes he has used before, I found the plot so compelling that I was literally unable to put the book down until I had finished.

I love the way Gaiman writes.  He says that he is often asked by people how to become a writer, and his answer is always the same: write.

“This is how you do it: you sit down at the keyboard and you put one word after another until its done. It's that easy, and that hard.”

He writes so well about the sorts of things that I want to write about.  I find this both inspiring and frustrating.  I want to write, but how can I possibly hope to write this well?

How about this from "The Ocean at the End of the Lane"?

"I'm going to tell you something important. Grown-ups don't look like grown-ups on the inside either. Outside, they're big and thoughtless and they always know what they're doing. Inside, they look just like they always have. Like they did when they were your age . The truth is, there aren't any grown-ups. Not one, in the whole wide world."

Is that how being a grown-up feels to you?  It's definitely how I feel.  How can I ever get near that?  Well, I won't know unless I try, will I?  I keep talking about not having the right idea.  Well, as Gaiman also said:

“If you only write when you’re inspired you may be a fairly decent poet, but you’ll never be a novelist because you’re going to have to make your word count today and those words aren’t going to wait for you whether you’re inspired or not. You have to write when you’re not inspired. And you have to write the scenes that don’t inspire you. And the weird thing is that six months later, a year later, you’ll look back at them and you can’t remember which scenes you wrote when you were inspired and which scenes you just wrote because they had to be written next. The process of writing can be magical. … Mostly it’s a process of putting one word after another.”

Well, anyway.  It's a lovely book.  I strongly recommend that you give up a few hours of your time to read it.... although be warned that you may find yourself in floods of tears.

I might start on Robert Jordan's "Wheel of Time" series next, Alecya is up for reading it with me and comparing notes.  Anyone else game?  It's a mere 14 books and 4 million words.  You're up for that, right?
Posted by swisslet at 21:41