I dragged myself out for a run at lunchtime today. I say “dragged”, although obviously with me NOT going out was never an option. I went running last night, an hour or two before the sky was split by some splendid electrical storms. I only ran a little over three miles, but it was mercilessly hot and humid just before the storm broke and it was a real slog. We’ve been having torrential downpours all day, and it’s still pretty muggy, but obviously I’m not going to let something like that stop me from flogging myself when I’ve decided that’s what I’m going to do.

I’d forgotten my headphones, so this was the first time that I’ve been out for a run on my own without music for years. You know what? It was actually really nice. The weather meant there was almost nobody else around, and I was able to listen to the sound of the rain on the canal and on the trees around the towpath, and to listen to the birds who were singing their hearts out as the rain began to abate. It was nice.

Perhaps it was the weather, but when I saw a large, soggy pigeon lurch heavily into the air from the canalside and flap awkwardly into the trees on the other side, I was reminded of the time we spent in the jungle off the Coca River in Ecuador. The Coca is massive. It may only be a tributary of the Amazon, but when we travelled down it in a motorised canoe for several hours to get to our jungle lodge, it must have been at least a kilometre wide, with rainforest clinging to the very edge of the banks on both sides. The lodge itself was off the main river and down a maze of much smaller tributaries, each with vegetation hanging heavily down on every side. 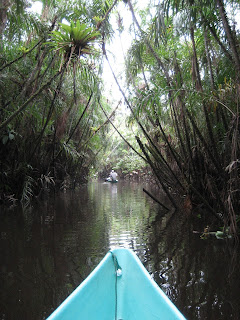 This part of the world is filled with all kinds of birds of course, and it was common to see toucan or kingfisher or vultures flying about. The bird that I really remember from the jungle though is the Hoatzin. 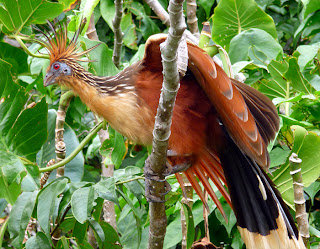 It’s a peculiar bird. A relic, really, and it is apparently unique amongst all birds. Almost closer to the dinosaurs than it is to other birds. What I remember most about it is this: that the locals call it the “Stinky Turkey” because of it’s distinctive smell (caused by it’s unique digestive system, apparently) and that it makes the most extraordinary noises… strange wheezy, groaning noises, and it has a peculiar, lurching flight that makes an odd creaking noise as it flaps laboriously into the air.

Running today, that pigeon taking off damply from the side of the canal and flapping heavily into the trees on the other side, really took me back to that little piece of the Amazon jungle in Ecuador. Just for a moment, I could have been in the rainforest watching a Hoatzin lurching heavily into the air. 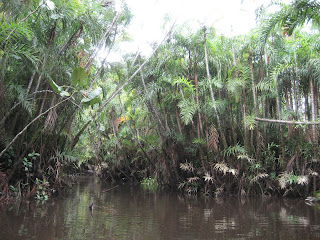 But no. I was still in Beeston.

On the plus side, that meant I had access to a proper shower when I got back, and there probably aren’t many tarantulas hunting moths around my kitchen lights here, and liable to fall onto the table as I’m having my dinner, I’m sad to say.