Not that I’m revelling in the collapse of the Australian cricket team, but after spending most of my life watching a succession of feeble England sides being mercilessly humped by the Aussies, I’m certainly enjoying our current spell of success. Probably not all that surprising then, given the amount of cricket I’ve been watching, that I’ve got a few cricket-themed songs in my head. “Soul Limbo” was, of course, the BBC theme tune to their cricket coverage for many years. For my money, no other tv station has come close with a theme that’s anywhere near as good. Perhaps not in any sport. “Mambo Number 5” was a pretty good effort by Channel 4, but I couldn’t even tell you what the theme tune to Sky’s coverage is. “Dreadlock Holiday” isn’t really about cricket, of course, it’s about the mugging of a white idiot on a Caribbean island, but it does talk about loving cricket, so it’s alright with me. “C’mon Aussie C’mon”? Well, I watched a little bit of the dramatisation of the story of Kerry Packer and World Series Cricket, and this song played a pivotal role and is still sung by Aussie cricket fans to this day. The dramatisation? Well, I wasn’t at all convinced by Ian Chappell’s dodgy wig and tash, and it wasn’t as good as their 1980s Bodyline drama starring Hugo Weaving as Douglas Jardine, but it was alright. I thought I’d probably best leave out all the Duckworth-Lewis Method songs that have been in my head, eh? There is such a thing as cricket song overkill, I think. Saturation is approaching. There’s a week until the third Test though, so we should be good. For a bit.

Nope. No idea. Catchy though, isn’t it?

The National – “I Should Live in Salt”

I love the understated, miserable majesty of the National and their new album is slowly working it’s way into my head. This is the opening track, and I’ve read a few reviews that say that this is a weak point… I totally disagree though and think that this is surely one of the strongest songs on the album. I love the way that singer Matt Berninger reaches for an almost falsetto chorus in stark contrast to his usual bass baritone. I also like the theme of regret that permeates the song. It’s wonderful. I read asta’s review of my 2008 shuffleathon disc that I sent her, and I had to stop and laugh and how relentlessly miserable the playlist is. Goodness me, but I like depressing music. I love it. Happiness is all very well, but no good music ever came out of it.

By a long chalk not my favourite song by the band, but it’s hard to deny it’s efficacy as an earworm. Once it gets in, it sinks its teeth in and won’t let go. It’s not entirely welcome, and “God Only Knows” would have suited me better, but what can you do?

Two songs that I put on the mixtape that I sent over to Alecya the other week. I like to try out my playlists before I make them up into a CD, and once I’ve sent the CD out, I like to listen to the playlist a bit and to let them breathe. I hope Alecya feels the same way, but I reckon it sounds okay. Alt-J are one of those bands that seem to get better every time I listen to the album, and they’re not quite like any other band that I can think of. There simply aren’t enough songs about geometric shapes, are there? And as for Billy… well. It’s Billy, isn’t it? I first heard this song when a prospective candidate for president of my student union at Warwick stood up and sung this at hustings. I thought at the time that it was revoltingly politically correct, but when I hear it now, it makes my heart swell up with pride as the sentiment is so splendid. Your laws do not apply to me. Oh, that and the bit about his Uncle who once played for Red Star Belgrade. He thought that some things were really best left unspoken, but Billy prefers them all to be out in the open. When he plays that live, he changes the lyric to “I’ve left your auntie and I’ve run off with the postman”. What a wag!

Earworm in excelsis. It also makes me think of this poster, which makes me happy. 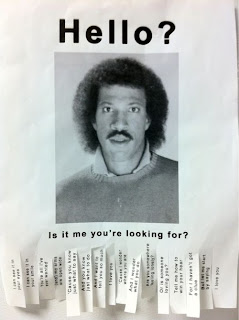 Still one of the most played songs on my iTunes, which I think shows how much I listened to it a few years ago rather than how much I listen to it now. I heard it on the radio the other day and it sounded splendid. Good song and an interesting band.

Deep Purple – “Smoke on the Water”

Magnificent.  Have a good weekend, y'all.
Posted by swisslet at 19:14