It's been a little over a year since Jack Osbourne was diagnosed with multiple sclerosis.  I wrote about it at the time, so I won't go over it all again now.  I will repeat this bit though:

"I've got MS and although I'm relatively lightly affected compared to many, I still wouldn't wish it on my worst enemy. It's a shit condition. I don't care how rich or famous Jack Osbourne is, or how he chose to tell the world about his diagnosis, it's still a shit condition".

MS seems to affect everyone differently: Jack Osbourne experienced problems with his vision, and I woke up one day with a numb hand.... we both have MS, but I should think that we both experience it differently and are differently affected.  There seems to be a slightly unfortunate tendency amongst people with MS to compare symptoms; to try and work out who is worse affected; the harder you are hit, the more you WIN.  Ridiculous, but there you are.  I've spoken before about how I feel as though I'm being assessed by every other patient in the waiting room when I go to an MS clinic, but you can see the same thing online too.

There are lots of people who blog about MS; people who talk about it far more than I do.  That's okay.  It's a very frightening experience to develop symptoms like these and to be given such an awful diagnosis by a doctor; to be labelled for the rest of your life with a chronic, incurable condition.  That there are lots of people around sharing their experiences, and hopefully showing that life goes on and that you are not alone is certainly a good thing.

Stumbling in Flats is one of these bloggers.  We appear in the same section ("MS Bloggers N-S") of the Carnival of MS Bloggers, so we're practically related.  She mostly writes about her MS, but she tries her hardest to laugh at it and to share her triumphs and her disasters.  She's fearless and funny.  She blogged yesterday about how she has been receiving some criticism in emails from people who think she's not taking this condition seriously enough and that you shouldn't belittle our suffering by laughing at it.  Well, that's just bollocks.  Apart from anything else, it's her blog and she can write what she damn well wants.  If people don't like it, then no one is making them read it.  What fucking right do these people have to tell someone how they should react to their own condition?  MS is a bomb that has gone off in this girl's life; it has paid no heed to her circumstances or to her dreams.  It pays her no respect, so why should she respect it in return?  To my mind, laughter is the only sane response.  Fuck MS.  Laughter is the only response it deserves.

Back to Jack Osbourne.... I was reading another MS blog the other day (honestly, I don't make a  habit of this as many of them are just depressing, self-pitying wallows, but there are some really good ones).  This one had a picture of a People Magazine cover from last year showing Sharon Osbourne's reaction to her son's diagnosis. 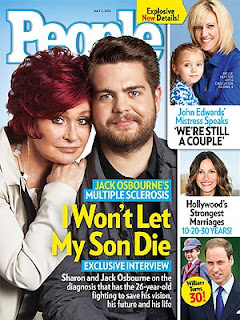 Look.  I'm accustomed to people getting the wrong end of the stick about how MS works and the likely disease progression, but this is ridiculous.  You won't let your son die?  Um..... do you want to tell her, or shall I?  Actually, let's leave it - on bass guitar - to the Duke of Spook, the Doc of Shock, the Man with No Tan.  Please say hello to Death himself... The Grim Reaper!

"You might be a king or a little street sweeper, but sooner or later you dance with the Reaper".

Everyone dies, you idiot... no matter how rich or stupid.

What is it that Gaff says at the end of Blade Runner? "It's too bad she won't live! But then again, who does?"