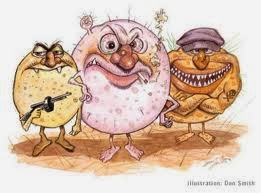 At some point, late in 2002, I contracted a nasty bout of bacterial food poisoning. I’ve rarely felt so ill in my life: I was wracked by stomach cramps, cold sweats and was pretty much delirious. In the course of about a week, I lost more than a stone in weight, and I don’t think my insides have ever been quite the same since. I’m fairly sure that the way that I digest food was compromised in some way, and I’ve been steadily losing weight ever since. I found out after the event, thanks to a stool sample delivered to the doctor (and have you ever tried crapping in a sample bottle when you have the shits?) that I had campylobacter

The Public Health authority sent me an incredibly detailed questionannaire to try and track down where I picked up the infection. I wasn’t 100% sure, but it probably tracked back to a pretty nice restaurant in Nottingham that has now – perhaps coincidentally – closed down and become a Caffé Nero.

Campylobacter is linked with Guillain–Barré, a disease that affects the peripheral nervous system

As wiki says, “the disorder is characterized by symmetrical weakness that usually affects the lower limbs first, and rapidly progresses in an ascending fashion. Patients generally notice weakness in their legs, manifesting as "rubbery legs" or legs that tend to buckle, with or without dysesthesias (numbness or tingling).”

Hmmm.  Sounds familiar.  Not surprisingly then, when I first began to exhibit the symptoms of MS in 2005, my neurologists were very interested indeed in my bout of food poisoning, and keen to carry out all sorts of blood tests.

I thought of this when I read this article on the BBC today.

Apparently, a food poisoning bacterium may be implicated in MS.

“Lab tests in mice by the team from Weill Cornell Medical College revealed a toxin made by a rare strain of Clostridium perfringens caused MS-like damage in the brain....earlier work by the same team, published in PLoS ONE, identified the toxin-producing strain of C. perfringens in a young woman with MS….C. perfringens, found in soil and contaminated undercooked meat, comes in different strains. Most cases of human infection occur as food poisoning - diarrhoea and stomach cramps that usually resolve within a day or so. More rarely, the bacterium can cause gas gangrene. And a particular strain of C. perfringens, Type B, which the Weill team says it identified in a human for the first time, makes a toxin that can travel through blood to the brain. In their lab studies on rodents the researchers found that the toxin, called epsilon, crossed the blood-brain barrier and killed myelin-producing cells - the typical damage seen in MS. Lead investigator Jennifer Linden said the findings are important because if it can be confirmed that epsilon toxin is a trigger of MS, a vaccine or antibody against the toxin might be able to halt or prevent this debilitating disease.”

Clearly, this is a different bacterium to campylobacter, but isn’t that interesting? The decline of pirates and the increase in global temperatures has taught us that correlation does not imply causation*, but just maybe it is more than coincidence that my first MS symptoms arrived relatively soon after my bout of food poisoning.  Maybe something nasty did jump across the blood-brain barrier and take up residence.  Who knows?

Nobody knows the underlying cause of MS (which, in any case, may well be an umbrella term for a number of completely different illnesses). Identifying that cause/causes – and this news could be a step in the right direction - would surely be a giant step towards understanding how we might be able to prevent, treat and perhaps even reverse the damage caused by the condition.

Ultimately, whether the food poisoning triggered my MS or not doesn’t really matter very much now.  I've got what I've got now, and at the risk of sounding excessively stoical, it is what it is…. but if we can learn how to stop this happening to anyone else…well, that would be just dandy, wouldn’t it?

* As the original open letter from Bobby Henderson to the Kansas School Board that ultimately kickstarted the Church of the Flying Spaghetti Monster says, “You may be interested to know that global warming, earthquakes, hurricanes, and other natural disasters are a direct effect of the shrinking numbers of Pirates since the 1800s. For your interest, I have included a graph of the approximate number of pirates versus the average global temperature over the last 200 years. As you can see, there is a statistically significant inverse relationship between pirates and global temperature.”  Correlation, my friends, does not imply causation.  Arr lad.  That it don't.
Posted by swisslet at 20:37