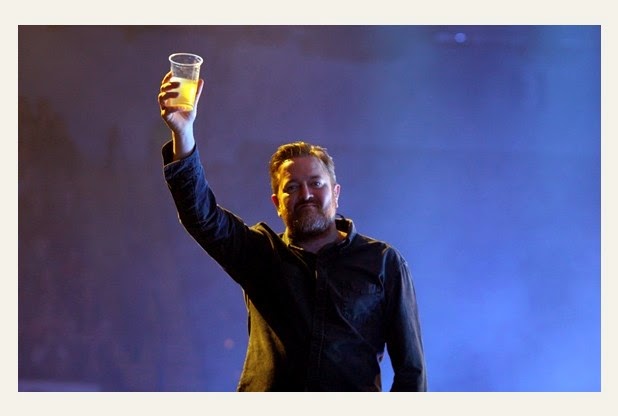 Elbow are one of those bands that I've seen many times over the years.  We go way back: I first discovered them way back in 2001 when "Red" - the first single to be released from their forthcoming debut album was available to stream on Yahoo or something like that.  I liked it enough to buy the album when it came out, and we've been together ever since.  I've reviewed them a few times on here over the years, too.  As is now traditional on Elbow reviews here, let's revisit a few choice quotes from those before we get started on last night's gig.

When I saw Elbow in February 2006, as they toured in support of their album "Leaders of the Free World", I had the following to say:

"They remind me a little of a non-stadium friendly Coldplay - with a better and more inventive lyricist. They're very downbeat and slightly melancholy, but they have a wonderful knack with a tune, and given the right moment, can be wonderfully uplifting. They deserve to be massive, but I would be very surprised if that ever really happens."

When I saw them again in April 2008, touring the newly released "Seldom Seen Kid" album, I quoted that line again, adding that:

"Their media profile seems to be a bit higher these days, but somehow they remain a band that it's difficult to see ever really becoming as big as they deserve. Perhaps they're too self-effacing..."

Of course, not long after that, their world changed forever when they (deservedly) won the Mercury Music Prize on Tuesday 9th September 2009.... and they are now well established as an arena band and have their music featured to soundtrack inspiring montages on the telly and as the theme tune to the coverage of the London Olympics.  I couldn't be happier for them, but it shows what I know, eh?

As I said after their Sheffield gig in March 2009, "Elbow are a marvelously textured band; they write songs that take a while to soak in, but once they have soaked in, they seem to mature and deepen like a fine cellared wine, getting richer and broader with every listen"

Well, that's probably a more perceptive comment.  I'm not sure I can think of many other bands that produce songs as rich and layered as Elbow.  It's cliche to say that Guy Garvey is a warm and inclusive frontman and welcomes everyone into his genial embrace, but you only have to watch them to know that this has always been true and remains true even though he now plays to a constituency of tens of thousands of people every night.  The band have been together for more than twenty-five years, only relatively recently finding real success, and they so obviously remain a tightly-knit band of brothers, entirely comfortable with each other.  The band are far more than the sum of their parts, coming together to weave a web of carefully constructed sound, now often supplemented - as tonight - by a small orchestra.  On top of this, Garvey whispers his beautifully observed songs of love..... love songs not just to his lover, but to his friends, to drinking companions, to strangers he meets on the street and to every person on the whole damn planet.

The gig tonight is busy but not quite sold out, with tickets available on the door (even with the £30 I paid a good deal cheaper than Kylie is charging for her gig here in October).  The crowd is everything you'd expect from a mid-week arena gig for a band like this, and there is a pretty broad demographic here, swaying towards older couples and beardy blokes in their 30s and 40s.... in other words people like me.  We're more sedate than we used to be, and a double-bill of Jimi Goodwin from Doves followed by Elbow is just what the doctor ordered.

The band are really good tonight.  I've seen them better - and they seem to have been tailor-made for a sundown slot at Glastonbury - but they're pretty damn good tonight.  "The Take Off and Landing of Everything" is their sixth album and might just be their best yet.  For my money, "Build a Rocket Boys!" wasn't quite as good as "The Seldom Seen Kid" or "Leaders of the Free World".  It was good, but it wasn't quite as good.  This one sounds amazing; the songs here don't feel the need to shout for your attention, and I also think they're all a little bit less Elbow-by-numbers, reaching for all the right emotional buttons at all the right points.  Elbow have got a pretty good back catalogue to work with now, and it's hard not to be disappointed that we don't hear more songs from "Asleep in the Back" or "Cast of Thousands" (particularly "Fugitive Motel"), but such is the quality of the new album that it's hard to grumble that the set is heavily weighted towards it.  Take "The Blanket of Night": how many songs do you reckon are written from the perspective of two desperate refugees seeking asylum aboard a "paper cup of a boat"?  Always a compassionate man, Garvey really excels himself here (although, to be fair, it's also hard - as with almost all the songs on this album - not to see a subtext here about the end of his relationship to Emma Jane Unsworth too.  Poor heartbroken Guy).

Garvey, in particular... lovely Guy.... sounds fantastic tonight.  "Fly Boy Blue / Lunette", "New York Morning" and "The Loneliness of a Tower Crane Driver" all sound incredible (apparently, mentioning a much-loved New York celebrity in a song is a great way of getting her to ring you, should you be thinking about mentioning Yoko Ono in song).  All his usual stage banter is in place too: if you attend an Elbow gig, you should expect to be asked if you're okay at least once between every song.  He never varies much from his usual template, but he always seems entirely genuine when he asks, and you really sense that he cares about his audience in a way that someone like Liam Gallagher will never understand.  Special mention to guitarist Mark Potter too; where the dirty, stinking riff on "Grounds for Divorce" used to stand out as the exception in Elbow's set, I can't help but notice that he's managed to squeeze several more massive riffs into the new material.  Good work, fella!

Even a song as familiar as "One Day Like This" has refused to be dimmed by overexposure.  I've seen this song sung back at the band with greater gusto and feeling than I heard last night, but it didn't make a damn bit of difference to my enjoyment of it or my desire to sing it back to them as loudly as I could.  We even harmonised for them.

Guy Garvey is exactly one day older than me.  I may have weathered a little better than him, on the whole, but I can only aspire to a warmth and compassion on that kind of scale.

They're a band to be treasured.

Setlist:
Intro: This Blue World (instrumental)
Charge
The Bones of You
Fly Boy Blue / Lunette
Real Life (Angel)
The Night Will Always Win
New York Morning
The Loneliness of a Tower Crane Driver
Great Expectations
The Blanket Of Night
Mirrorball
The Birds
Grounds for Divorce
My Sad Captains
Encore:
Starlings
Lippy Kids
One Day Like This
Posted by swisslet at 19:45