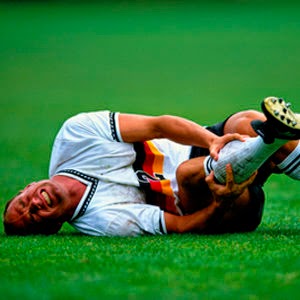 I did a half-Olympic distance triathlon in the early summer of 2005. I was preparing for the London triathlon, and I wanted to practice open water swimming in a wetsuit. It went pretty well, on the whole, and apart from getting excited and trying to breath once every four strokes, I was very pleased with how my preparation was going. After the event, before heading for home, I took advantage of one of the on-site physios and had a massage. The physio asked me if I had problems with my left calf, because I seemed to have a golf-ball sized knot of tissue in there that wouldn’t respond to manipulation. Um, not really, I said… and then later on that same night, I woke up in screaming agony as my entire left calf was seized up in a cramp that just would not ease off.

I never actually did the London triathlon. A month before the big day and a few weeks after that triathlon, I woke up with a numb hand and started my four-year journey towards an eventual diagnosis of multiple sclerosis. I’ve had various problems with my legs since then, but mostly they revolve around numbness and pins & needles and I’ve pretty much been able to ignore them and carry on with life as normal.

Over the last twelve months, it’s become apparent that I have a distinct weakness in the left side of my body: my muscles are smaller than on the other side and I’m slowly losing the ability to lift that leg up enough to prevent me stumbling as I run. As a result, I’ve developed a whole pile of knock-on injuries in my plantar fascia, ankle, ITB, knee and hip. It’s tedious, but I’m still running so life goes on.

Recently, I’ve started waking up in the night with cramping in both my calves. This usually happens in the small hours of the morning, and is so painful that I have to hop out of bed and desperately try to straighten out my spasming muscles. I have been hoping that this is just a sign that I’m working my muscles hard and not hydrating properly or eating enough potassium…. But it’s looking increasingly likely that this is another symptom of my MS. Apparently muscle spasms are an extremely common presenting symptom of MS, and cramping like this could affect as many as 40% of people with MS at some point. I’m actually starting to wonder, given how close the remark was to my initial symptoms, that the physio at that triathlon in 2005 may actually have spotted an underlying problem.

So what can I do about this? Honestly? Nothing much. Yet another thing to be excessively stoical about because I can’t really do anything to change it. I’m clearly not going to stop running, so I’ve now started to rigorously roll my calves and to massage them before bed every night and I’ve added magnesium and calcium supplements to my ever-increasing selection of pills that I take every day (they join fish oil, glucosamine, vitamin D, and vitamin B, as well as my once weekly injection of Avonex and a hatful of assorted analgesics). I might start drinking tonic water too – sadly without the gin – as the quinine is supposed to be helpful in preventing cramping.

In other news, I’m thinking about running a marathon. Given that I’m currently too broken to run more than about 7 miles without really hurting myself, this might sound ambitious…. But if I can adjust my mindset to stop myself thinking that I can do it inside four hours and to just focus on finishing, then it should be perfectly manageable.

Ha! Listen to me! It’s as if I don’t know myself any better than that. As if I’m not going to enter swearing blind that I’ll walk it if I have to, and will then train as hard and as fast as I possibly can, probably breaking myself in the process. Having that insight into myself doesn’t, of course, make me any less powerless to halt the inevitable…..
Posted by swisslet at 17:35