I've been cycling to work for about ten months now.  It's only four miles to work, give or take, but it soon adds up, and I've already got something like 1,500 miles on the clock already.  When you put it like that, it suddenly seems so much more worthwhile that I pulled my finger out and stopped driving to work.  Not to mention the thousands of additional calories that I've burned that I don't really need to burn.....

I enjoy it in the main, even if the vicissitudes of the British climate mean that I have got wetter in the last few weeks than I did throughout the whole of winter.

I have noticed that motorists don't really like cyclists, though.

Most of my commute is actually on cycle paths and away from roads, but it's not at all unusual to be abused by a car driver.  In the last seven days alone, I've been sworn at twice:  the first time was a driver swearing and gesticulating at me as I patiently waited for him to work his way through a section of roadworks that had closed one half of the road.  My light had turned green some time before, but as there was a queue of cars jumping the lights at the other end, I had no real option but to wait for them to get through.  This guy was the very last in the queue of about five who ran the red light, and he was clearly annoyed an embarrassed that everyone in front of him had filtered through so slowly, exposing him as a light-jumping idiot of the highest order. To conceal his embarrassment, he decided to swear vociferously at me through his windscreen, waving his hands wildly.  I stared at him impassively.

The second time was just yesterday: I was in the right hand lane at a set of lights at a junction.  The lights there are sequenced so the left hand lane has a filter that allows them to set off before the lights for the right hand lane change.  I was sat patiently waiting for my light to change, about eight cars down the queue.  I glanced over my shoulder briefly when a huge truck zoomed about six inches past me in the other lane, and I think the car behind that assumed I was about to jump out of my lane and into theirs.  That's the only thing I can think of that might have upset them.  Whatever she thought I was doing, as she drove past me, waiting at the lights, the driver leaned out of her window and shouted "TWAT" at me.

It's not just car drivers either.  I had a cyclist come past me the other day muttering swear words under her breath in my general direction, apparently irritated that I had inconvenienced her by being on the path where she wanted to be as she swung round a corner, even though I was on my side of the track. 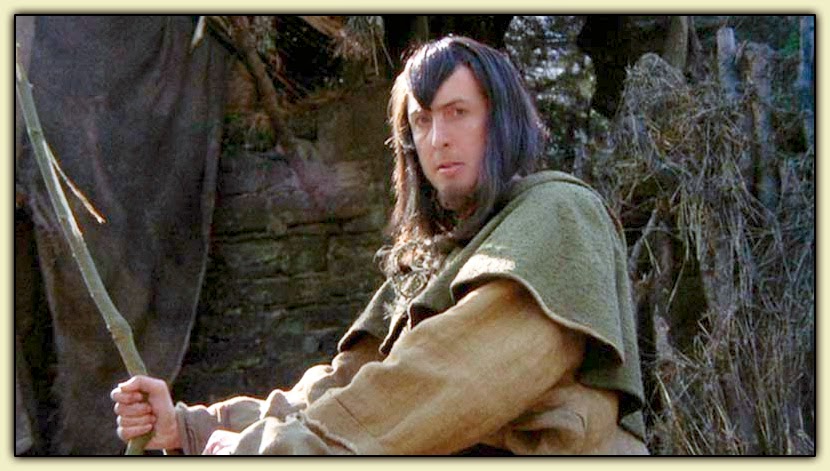 To quote Roger the Shrubber, "Oh, what sad times are these when passing ruffians can say Ni at will to old ladies. There is a pestilence upon this land, nothing is sacred. Even those who arrange and design shrubberies are under considerable economic stress in this period in history".

Why can't we all just get along?
Posted by swisslet at 20:03