The latest edition of Leftlion has just been published and, once again, it contains one of my music reviews.  When I started doing this, I mentioned to the music editor that I liked music with guitars.  He generally sends us a list of the latest stuff that he's been sent each month and asks us to pick.  My friend Mike, something of an expert on the local music scene around Nottingham, spends a fair bit of time carefully choosing the music that he wants to review.  I can't be doing with any of that, so I just ask the music editor to send me anything that he particularly wants reviewing.  Over the years, this has come to mean that I get sent a lot of punk and heavy metal.... and that suits me just fine.

Most of the stuff that gets sent in to Leftlion for review is self-funded, self-recorded stuff.  These guys are mostly doing it for love and certainly not for money.  Consequently, it's not my job as a critic for a free local rag to tear them to pieces.  The guidance is that, if I really don't like something, then I shouldn't review it.  Actually, this hasn't been a problem at all.  The only time I've turned something down was when I was sent an album by an astonishingly accomplished classical guitarist.  I simply didn't feel that I had enough of a frame of reference to do him justice, and rather than blag my way through a review, I sent it back.  Generally speaking, much of the music that I get sent is really excellent.  Some is recorded with higher production values than others, but the basic quality of the musicianship and songwriting is really very good.  I love the process of listening to something with absolutely no pre-conceptions about it.  The need to write a review means that I can't just listen without thinking and forces me to crystallise those thoughts into actual words.   It's all good.

Many of the bands are quite excited about being reviewed, even if only in a small, local magazine, but beyond the odd post on Facebook, I don't really get all that much feedback and I'm under no illusions about how big my readership might be.  A band I reviewed once did a showcase gig at Nottingham Playhouse, and I had the slightly odd experience of seeing a pull-out quote from my review hanging from a lamppost in town.  Uncredited, naturally.... but still.

Anyway, this month's review was for The Hip Priests. 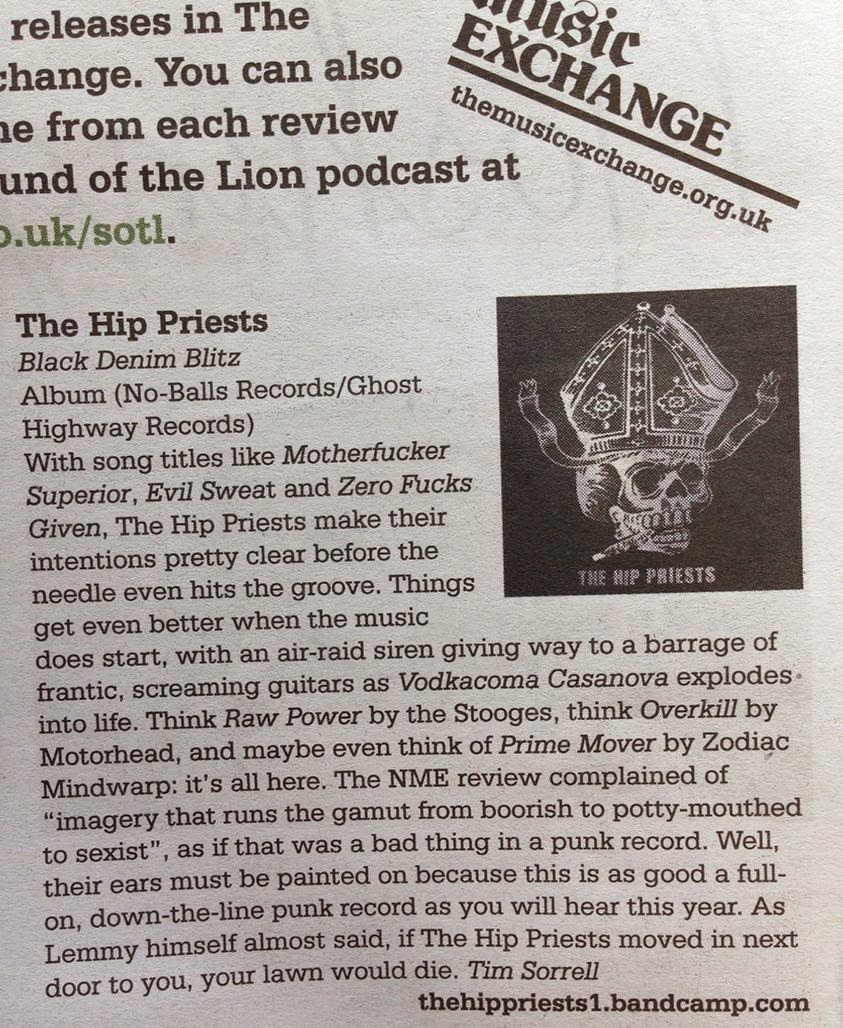 As you might guess from the fact that they were reviewed in the NME in the first place, they're actually very good: the production values on the record are first class and the band themselves are very slick.  Much more importantly, I think they've got it.

Don't believe me? Check them out for yourselves: