Today, for the first time, someone told me that I was walking like I was drunk.

Sadly, I wasn’t drunk at the time, I was simply walking down the office. I thought that I was walking in a straight line, but I apparently looked like I was about to lurch off sideways into one of the meeting rooms off the corridor at any moment. I sometimes get a bit stiff-legged the morning after a run, after my injection, or when I’ve been sat at my desk for a whole. I also know that, when I’m tired, I sometimes start to drag the left side of my body a bit… but until now, no one has ever told actually told me that I was walking as though I was inebriated. The person who told me this knows that I have MS and took the opportunity the next time she saw me to ask how I was, which was very kind of her. Other people probably see and draw their own conclusions. 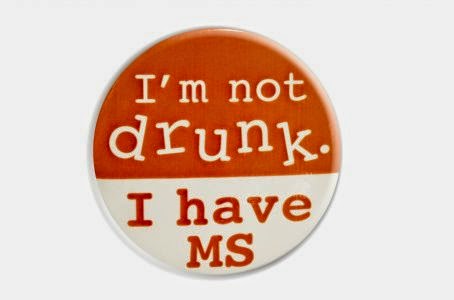 Apparently this is a thing for people with MS. Enough of a thing that the MS Society have felt a need to produce a load of products to put in their Christmas Catalogue with the appallingly passive-aggressive slogan “I’m not drunk, I have MS” . If you really want to, you can buy t-shirts, pin badges and pint glasses emblazoned with the slogan. Personally, I think that this is proclaiming and revelling in your victim status a little bit too much and allowing yourself to be defined by your condition, but each to their own.

I suppose that when an MS Society survey claims that 50% of people with MS in the UK have had their symptoms confused with drunkenness, it’s probably not that surprising that people are sensitive about it. Can’t you just imagine people tutting at you if they think you’re drunk first thing in the morning because you’re having trouble walking? Well, fuck’em, I say. Let the ignorant fuckers think what they want. If I’m walking like that, I’ve got enough to be worrying about without adding that to the pile. I’m certainly not buying a humorous t-shirt about it. What if I was wearing a coat or they weren’t close enough to read my pin badge? They’d still be judging me, wouldn’t they? (and I’m not sure waving my pint glass at them would help to change their minds, to be honest)

I’m generally fine: I’m running more miles at a faster pace than ever before. All the same, I’d be lying if I said that this wasn’t playing on my mind a little bit. I am sometimes stiff-legged and I do sometimes walk slowly and a little unsteadily. Part of this is because I’m 40 years old and I’m stiff from yesterday’s run… but part of it is also due to my MS and it’s worse now than it used to be and might get worse yet before we’re done. One day, I might well need a stick (or more) to help me. Is that a terrifying prospect?

Maybe a little bit (although it does give me a chance to get a cane with a hip flask or a sword in it or something) Does that mean that I want to dwell on it and to maybe buy a slogan t-shirt in the hope that it will help people to view my condition with a little more understanding? Not really.

Personally, I’m with Steve from It’s a Shit Business on this one: we should print up a batch of t-shirts that say “Yes, I am drunk AND I have MS – Let’s Party!” (It would work better on a pint glass than the MS Society slogan, that's for sure).

Maybe I should wear one when I’m running.
Posted by swisslet at 20:38