It's that most wonderful time of the year again when I get to be Santa.  I think I must have been doing this for about a decade now.  It was somewhat easier when she sat behind me at work than it has been in the last few years since she moved back to Australia.... but we manage.

Time was when the fact that her kids didn't know anyone with the same handwriting as Santa (and they checked *everything* that came into the house, which meant I had to be really careful with cards and things) was proof that Santa was real.  They're fifteen and twelve now, and mum and I had a brief discussion a few weeks ago about whether or not Santa's services were still required.  After a little consideration, the answer came back: "The eldest was asking about writing Santa a letter this year, so I think we're definitely on.  I've also realised that even if they were ready to move on, I'm not ready yet and I want this tradition to continue as long as possible".

I can't help but agree with that.  I absolutely love doing this and it will be something of a sad day when it comes to an end. 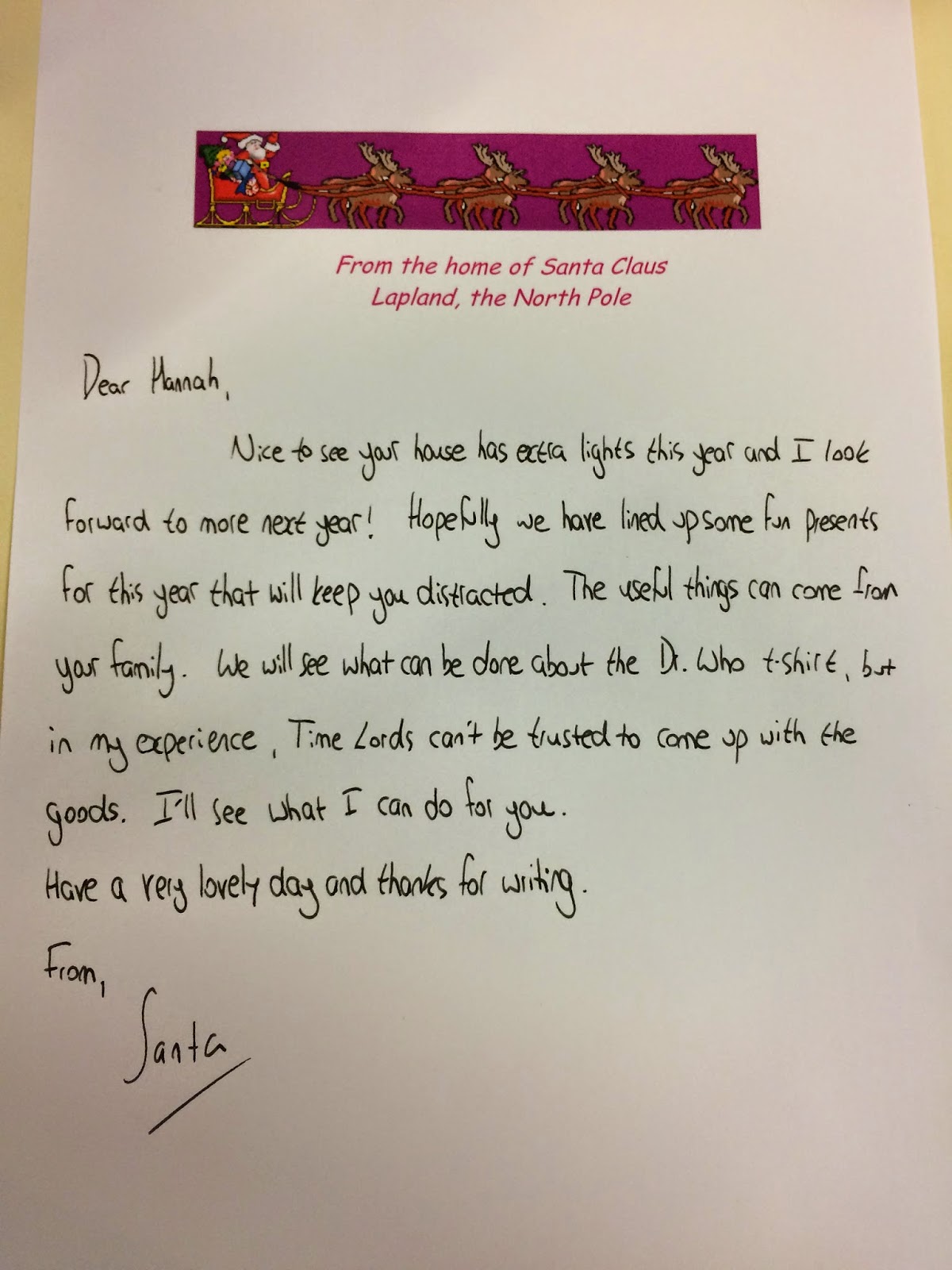 As ever, mum sent me copies of the letters her two daughters had written to Santa.  Hannah is the eldest, and she went through a phase where her letters basically said things like "I want a mobile phone".  Ellie, as the younger of the two, was happy drawing pictures and asking how Mrs. Claus was and was much more straightforwardly adorable.  But do you remember being a teenager?  Anyway, this year she seems to be back into the whole pretence and has written a proper letter.  Sadly for her, her mum wasn't really paying attention when she showed her the Dr.Who t-shirt that she really liked.  Oh well, these letters always were about expectation setting. 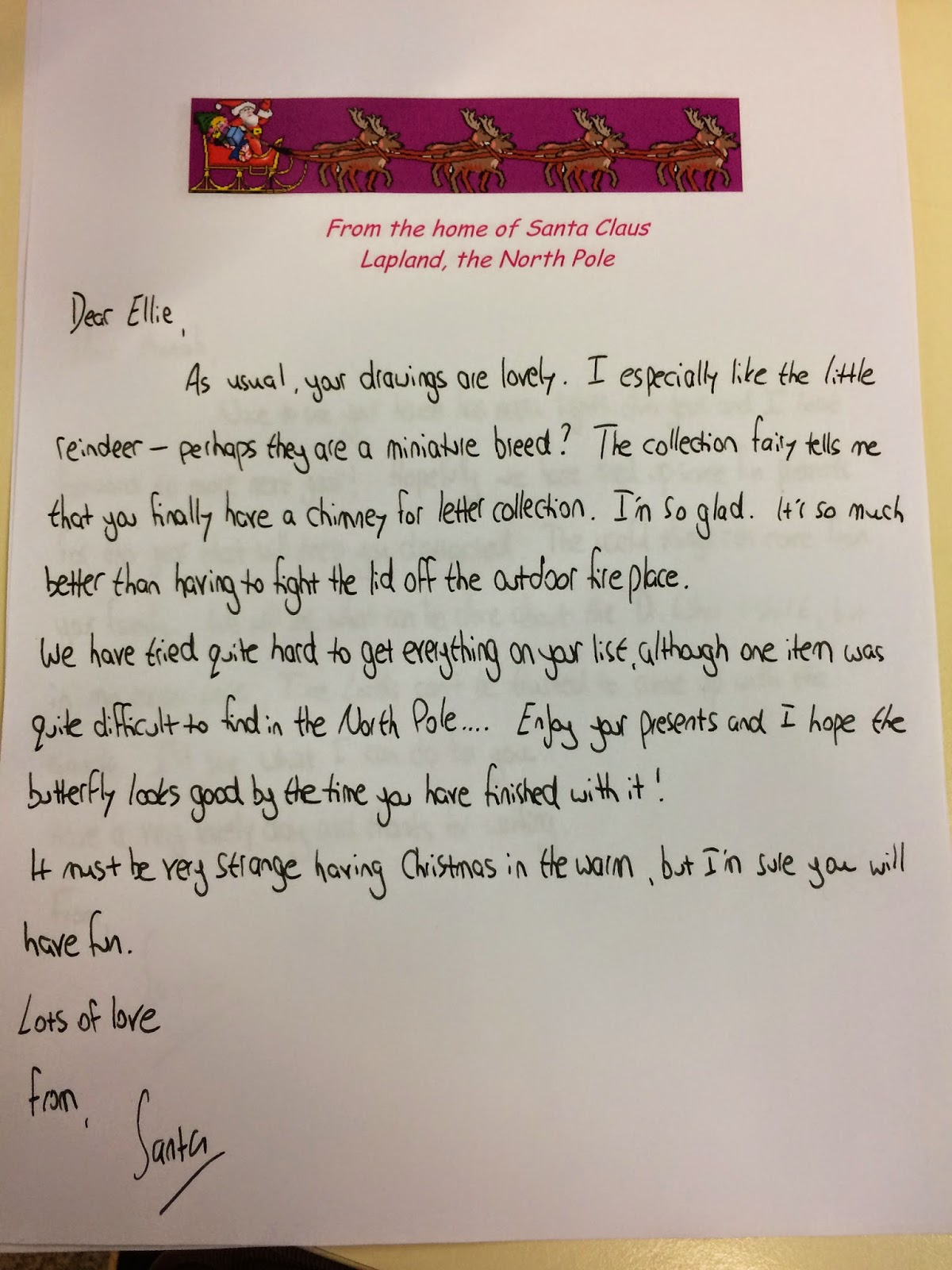 Now she's twelve, I imagine that Ellie is fully aware of the game that we all play about Santa.  Still, she seems willing to keep playing, and I like to think that it's all part of the traditional family Christmas that they grew up with.  As well as the letters, I also write up a set of gift tags too.  It's the complete package (well, as long as the postal service does the business.  Last guaranteed post to Australia before Christmas was about a week ago.  The letters have been scanned and emailed as a precaution.

Mum and Dad got a surprise letter from Santa too: 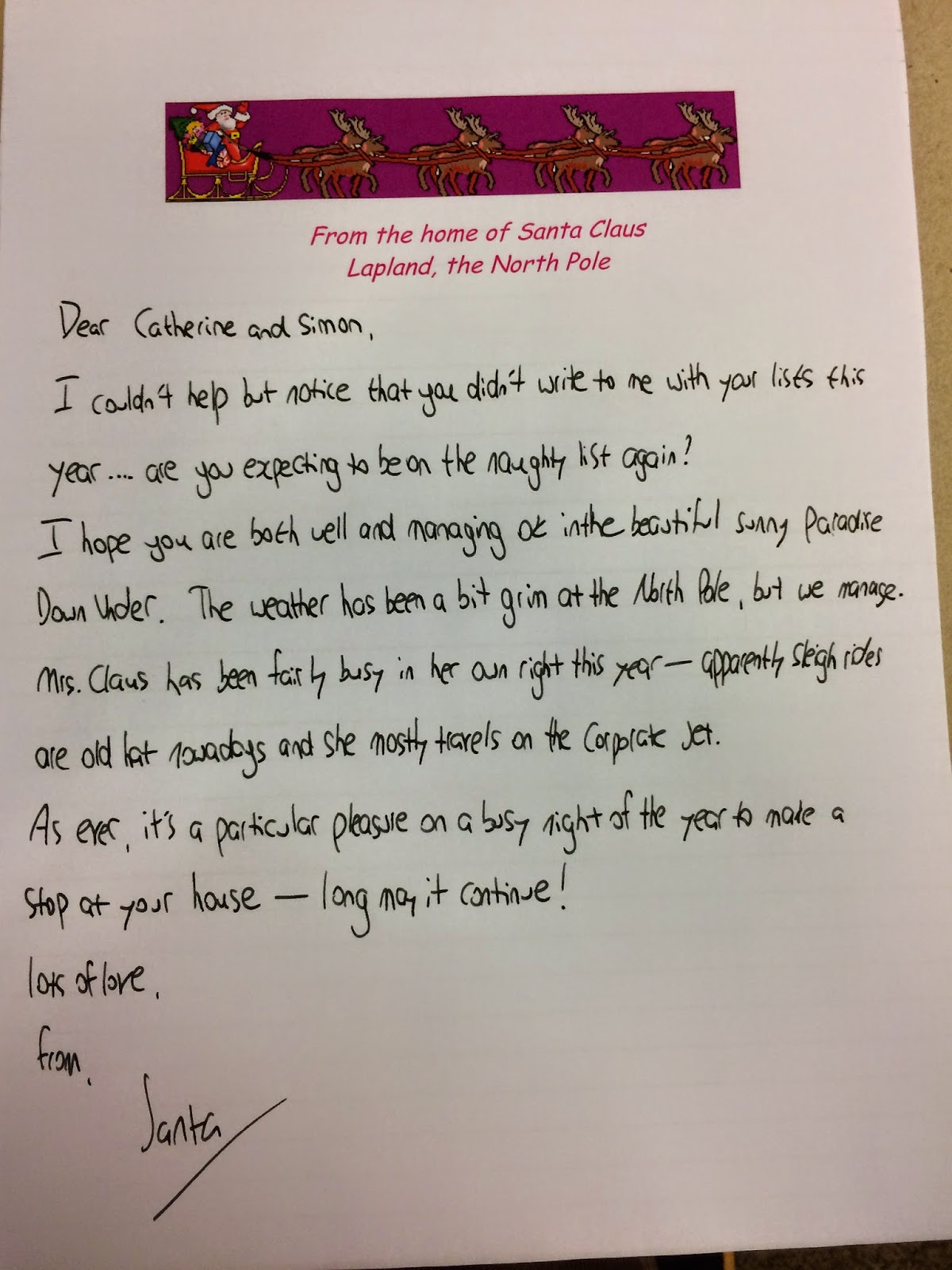 This is one of my favourite jobs of the year.  Without question.
Posted by swisslet at 18:40

Email ThisBlogThis!Share to TwitterShare to FacebookShare to Pinterest
Labels: compliments of the season, friendship