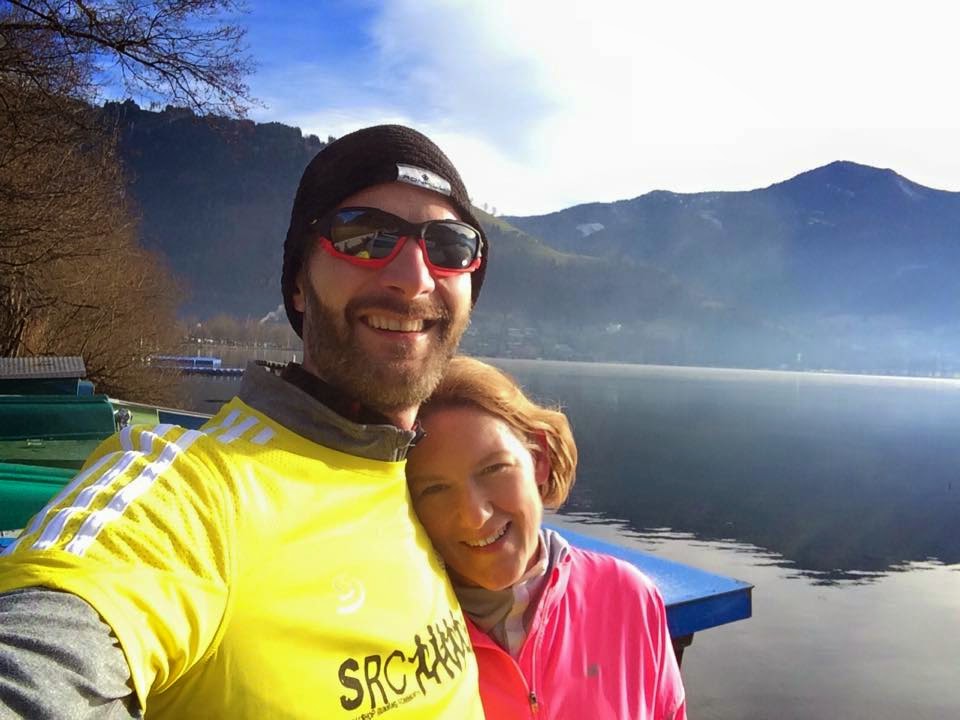 For may years, I mostly ran on my own.  In the last couple of years, joining a running club has meant that I've acquired a number of running buddies and often run in the company of other people.  It's fun and I'd recommend it to anyone.  In fact, if I had to single out the one thing that's made the biggest difference to my running recently, it would be running with other people.  Even if you're not having a chat with them as you go, just having other people around encourages you to run a little bit further and a little bit faster.  I'm not sure why that should be the case, but it definitely is.  Whether we talk during a run or not, one of the things that really makes it work is that we mostly run at around about the same kind of pace.  It sounds kind of obvious, I know.

This April, I will be running the London Marathon with my wife.

This isn't something we do all that often.  The reason?  We just don't run at the same pace.  My Parkrun PB is 22-something minutes.  C's best time is around 28 minutes.  Perhaps that doesn't sound like much, but over the course of a marathon, I reckon that would equate to several miles.  To make matters even more awkward, my comfortable "slow" pace is actually a little bit slower than my wife's normal pace. This means that I find it disproportionately difficult to run with my wife.  I'm pretty sure that she finds it difficult too, because there can't be much more annoying than some great lanky clown practically running backwards alongside you as you're flogging your guts out.

Why are we running together?  Mostly because I think my wife understands me well enough to know that, if I was left entirely to my own devices, I would set myself a target of running my first full marathon in less than four hours and that I would probably break myself in the process.  Amongst other things, my MS has seen a general weakening of the whole left-hand side of my body.  I have about 10% less muscle on my left leg to my right and when I get tired, I tend to drag that whole side and I scuff my left foot.  This has given me a whole pile of knock-on issues in my left foot, left knee and left hip, and I haven't done a run longer than eight miles since the spring of 2013.  Training and running the marathon with my wife immediately takes the pressure off my training by enabling me to run much more slowly, putting less strain on my body.

That's not to say it's not putting some strain on our marriage though.  We managed to fall out about halfway round a 5km Parkrun.  We nearly fell out again this Sunday on our 7.6 mile long run: C has mild asthma and she struggles to control her breathing when the air is cold or if there's a lot of traffic about.  Sometimes, she has to stop to catch her breath for thirty seconds or so before starting up again.  The problem is that stopping and starting is perhaps the one thing about running that I find the most difficult.  I even hate stopping at pedestrian crossings because even a pause as short as that is enough for the muscles in my legs to start to seize up.  After stopping, I seem to find it harder to pick up my left leg properly and I start scuffing more and more, sometimes tripping over.  So I don't like stopping in the middle of a run, and  I'm afraid that my body language reflects this.  Not surprisingly, this irritates my wife.

A marathon is a little over 42km.  26.2 miles.  That's quite a lot further than 7.6 miles and definitely further than 5km.  The London Marathon is on 26th April 2015 and we have a lot of training mileage to get through between now and then.

Actually, you know what?  We really will be.  My wife works long hours and spends a lot of time away from home on business most weeks.  Over the last couple of months, as we've started to train together, we've been spending a lot more time together and it's actually been really nice.  Sure, we get cross with each other from time-to-time, but it seems that we actually do like each other and I'm genuinely looking forward to sharing the experience of this marathon with her every step of the way.


....that being said, I did quite enjoy last week's Parkrun when she was on her way back from New York and I could just pin my ears back and let rip.  I don't need to do it every week, but once in a while it's nice to just run for myself.
Posted by swisslet at 23:04

Email ThisBlogThis!Share to TwitterShare to FacebookShare to Pinterest
Labels: C, exercise as therapy, MS Trust, we do not talk about running club, WTs