Back in 2008, Glastonbury announced that Jay-Z would be headlining the Pyramid Stage on the Saturday night of the festival.  Cue uproar, with no less an authority than Noel Gallagher acting as spokesman for the rest of the world by saying 'I'm sorry, but Jay-Z? No chance. Glastonbury has the tradition of guitar music ... I'm not having hip-hop at Glastonbury. It's wrong.'

Well, given that the worst headliners I have seen at Glastonbury in all the years I've been going were Oasis, this seemed ironic.... and of course Jay-Z made fools of the naysayers from the moment he burst onto stage and played a fusion of "Wonderwall" and "99 Problems".  He absolutely slayed it that night in front of a packed crowd.

I was there that night.  I'm not really a fan of Jay-Z but I am a fan of music, and I was keen to watch one of the world's biggest acts at the top of his game.  And you know what? He was really good and I was thoroughly entertained throughout.  You'd think if this whole affair showed us anything, it showed us how entirely pointless it is to complain that a band somehow doesn't belong at an event, especially an event like Glastonbury.

The Glastonbury Festival sells out within an hour or so of tickets going on-sale.  At that point, the people buying tickets have absolutely no idea who is going to be playing the event and won't know for at least another six months.  And no one cares.  You're not going to Glastonbury just to see the bands.  They don't pay headliners as much as other festivals, and in the past they've forged something of a reputation for giving up-and-coming bands an early chance to headline (Coldplay in 2002 being an excellent example).  Of all the festivals in the UK, Glastonbury is the one that is about so much more than the music: there are 175,000 people on a 900 acre site with a perimeter fence that covers nearly nine miles; there are something like 40 music stages, a theatre, a circus, a craft field, tipis.... you definitely don't need to be sucked down to the main stage every night to watch the headliners.  In fact, you could easily argue that, if that's all you do, then you're missing out on the best parts.  Almost all of my favourite Glastonbury memories come from when I wasn't at the Pyramid Stage.

The fuss about the headliner was new in 2008, but it's subsequently become a tediously predictable part of the festival.  Look at the fuss when Metallica played in 2014.  They're one of the biggest bands in the world and a phenomenally good live act, and yet people got their knickers in a twist about how they somehow "didn't belong" at Glastonbury.  Nonsense, of course.

And now it's Kanye West.

There's a petition to stop him playing that has nearly 50,000 signatures.  There's also a Tumblr called "White People Angry About Kanye", mocking the ridiculous response to the announcement.

Kanye West is clearly an idiot.  I don't really like his music and I like all the bullshit around him even less.  But you know what?  I'll just do something else that night instead.  The end.  It's not as though anyone is making me watch him, is it?  Anyone who has a ticket to the festival who doesn't want to watch him can do exactly the same thing and vote with their feet.  You could drink real ale at the tent by the Acoustic Stage, you could sit up in the Stone Circle.... or you could just have an early night reading a book.  You could do pretty much anything.

I guarantee you that no one will be returning their ticket over this, and the fuss about the booking is utterly tedious.  It says far more about the people complaining than it does about Kanye West and they should just shut the hell up.

Besides, what could be a more appropriate environment to see a centaur in the wild in wellington boots than at the Glastonbury Festival? 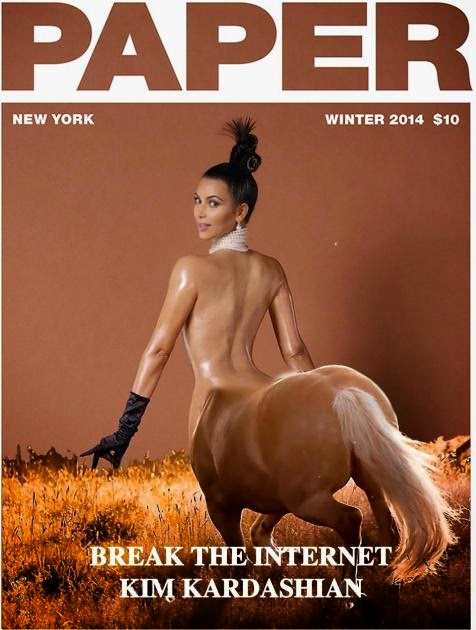 Well, it will make a change from the usual, common-or-garden unicorns, anyway......
Posted by swisslet at 20:24