For some people, the challenge of just running a marathon isn't enough: they have to do to make it a bit more interesting.  We saw some remarkable costumes on Sunday: the Jamaican bobsleigh team complete with a homemade bobsleigh, a woman in stiletto heels, a massive tyrannosaurus rex complete with moving legs, some toilets running for WaterAid, the TARDIS, the Mona Lisa, lots of rhinos, a telephone box, Buzz, Woody & Jessie carrying Andy's toy-box, Snow White, an elephant, a spotted dog.... we were even overtaken somewhere around Canary Wharf by a couple running the whole thing three-legged.  Now, I've spent the last four months training for this race in the company of my wife, and let me tell you, that was hard enough without being actually tied to her....

They're all mad, obviously, but mad in a nice way.  It's part of what makes the London Marathon such an extraordinary experience.

Mind you, this was quite a sight to see at about mile 15. 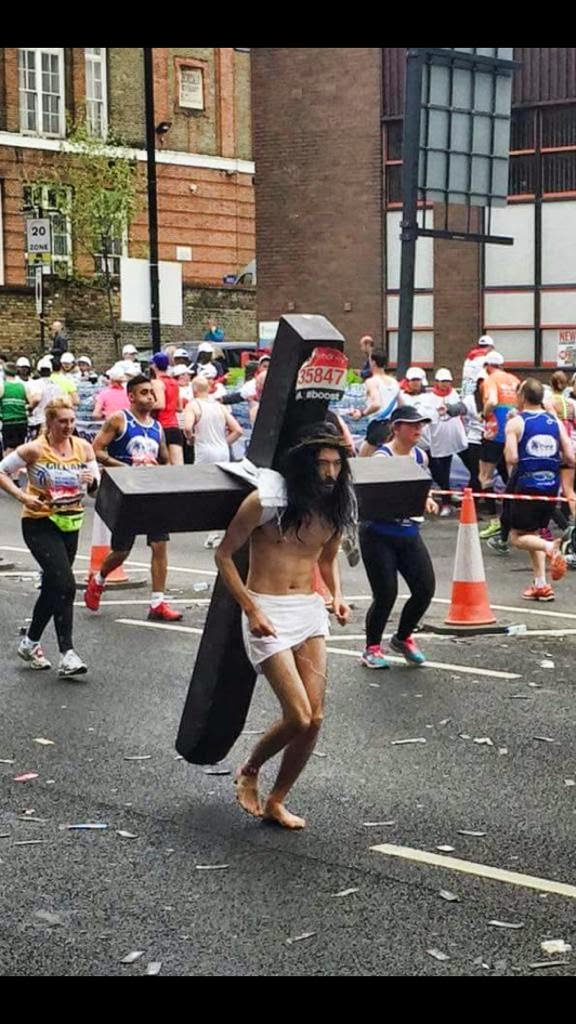 The cross wasn't made of wood, but had already made his back bleed with a full ten miles to go before he finished.... and bare feet? In London?  I'm not sure if he was running for a charity, but he did have a sign on the crucifix saying that he was pro-peace and anti-racism, which is good.  He took up some road space anyway - it seemed to take an age to run around him.

Apparently he finished in a little over six hours, but you have to wonder if he's not just properly mad, don't you?  I'd suggest that, at the very least, it's probably in pretty poor taste...

I'm told that, if we raise more than £1000 for our chosen charity at work, then I will be running the Robin Hood half marathon in fancy dress.  Super Heroes, probably....  So that's something to look forward to, eh?

When I crossed the finish line on Sunday, I was fairly convinced that my body was giving me clear signals that it isn't really built to run 26.2 miles.  When someone at running club asked me on Monday evening if I would run another, they told me that my fractional pause before answering told them everything they needed to know.  Three days after crossing the finish line, and I rather irritatingly find myself wondering what kind of time I could manage if I was to run one on my own.  I went for a sports massage this evening.  I've been a few times during training, and I've had some great chats with Pete the masseuse about running.  He's done quite a lot in his time, this week revealing that he'd run the Bangkok marathon and the Siem Riep half marathon (hot, apparently).  As I paid up this evening, he looked me up and down and told me that he reckoned that  I was the type who wouldn't be happy with just the one marathon.

Dangnabbit.
Posted by swisslet at 21:46

Email ThisBlogThis!Share to TwitterShare to FacebookShare to Pinterest
Labels: crazy in the coconut, exercise as therapy, we do not talk about running club