the lucky and the strong...

“Pain is inevitable. Suffering is optional. Say you’re running and you think, ‘Man, this hurts, I can’t take it anymore’. The ‘hurt’ part is an unavoidable reality, but whether or not you can stand anymore is up to the runner himself”
Haruki Murakami 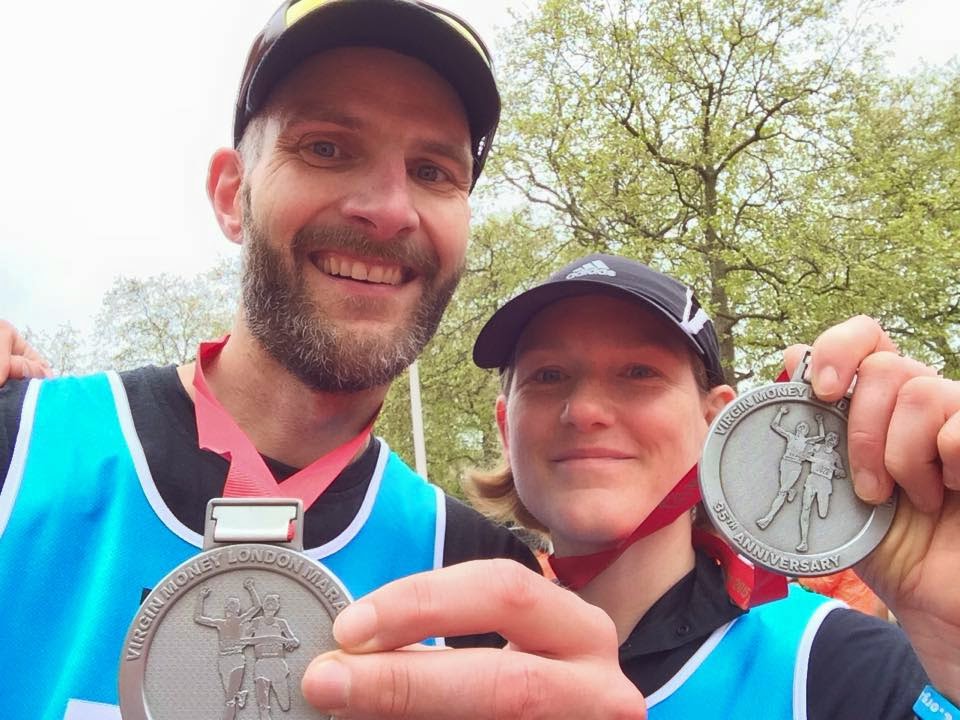 And so it was that, at around 15:20 on Sunday afternoon, I crossed the finish line of the 2015 London Marathon hand-in-hand with my wife. It took us some 4 hours 59 minutes and 23 seconds to cover the famous 26.2 miles, starting on Blackheath Common and finishing on the Mall. I was pleased to break five hours, but the time was essentially irrelevant: for us this was always going to be about the journey. It’s a journey that I suppose officially started with day#1 of the training programme in January this year, but really started about a year ago, when I made the decision that I was going to try to run a marathon and my wife decided that she wasn’t going to let me do it alone.  She says it was because she didn't want me to hurt myself in training, but I think that secretly she didn't like the thought of me doing a marathon without her (which is the same reason she came skydiving with me in Namibia).  Whatever, I suppose the whys don't really matter all that much now.

Since that moment, we’ve been on a real voyage into unchartered territory, both in terms of the miles we ran and in coming to terms with doing them all together. It was quite an adjustment for both of us, as we both normally run on our own.

I’m naturally the faster runner, so I had to learn to run more slowly; I’m also apparently something of a stealth runner, moving along almost silently where C. needs to work hard to control her breathing; I almost always run to music too, and I’ve had to put the headphones away. My wife is a very determined woman, and once she got the bit between her teeth and a target in her sights, nothing was going to stop her achieving this. I think it’s been hard for someone as single-minded as that to put herself into my hands as chief pacemaker and route-planner. In addition, to run with me is to enter into my world… and I am merciless on myself, never allowing myself a respite, whatever the weather and however I’m feeling. If you run with me, I will be merciless on you too. But we survived, marriage intact.  Perhaps even stronger.

One of our earliest runs together was at Colwick parkrun, and we fell out after about 2 miles over C. stopping for a walk. Luckily for me and for our running partnership (and our relationship), I resisted the temptation to take off on my own, and we finished together. If we couldn’t agree over two miles, then twenty-six miles has never felt further. But we survived.  More than that, actually I have learned to really enjoy the amount of quality time that we have been spending together when normally we would be apart doing our own things. I also worried that the training might be too much for my body to withstand, but actually it’s been kind of fun once time was taken off the table.... fun in a masochistic sort of a way, anyway.  We’ve shared so much of this experience together.

After all those hours and hours of training, I suppose there’s always the danger that the marathon itself would be something of an anti-climax… and to be perfectly honest, in some ways it was. It was so exciting lining up in the starting pens and to cross the starting line with tens of thousands of other runners in front of a grandstand. It was great too to meet up at our designated meeting point (we were in different start zones) and to settle down into the rhythm of the run. The crowds were mostly amazing, and there were some real high points where we went through some incredible landmarks – the Cutty Sark, Tower Bridge – cheered to the rafters by a packed out crowd. We saw family and friends at key strategic moments and were cheered on by name by complete strangers almost all of the way. 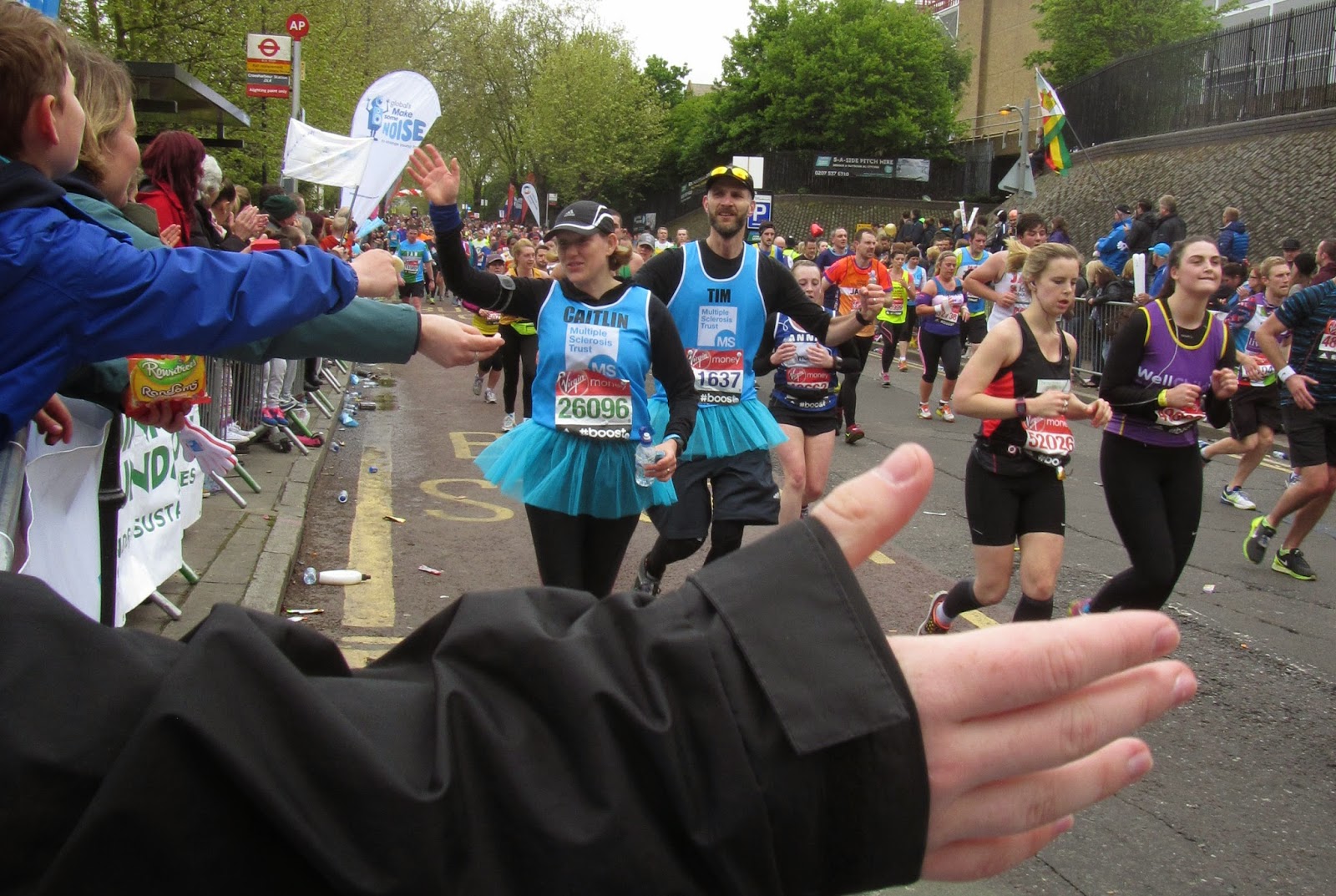 But at the same time, it was a slog. I nearly fell over on Tower Bridge and only stayed upright by nearly yanking my wife’s arm off. By about mile 15, my hips were grinding and my thighs were beginning to burn and I had to look inside for the inspiration to face up to the ten miles that remained. I nearly fell again in Canary Wharf and I started to fall slightly behind C, who looked back anxiously to see how I was doing. I kept going, of course, buoyed by the crowds willing us on and by my wife's strength and determination  By the time we reached the 20 mile marker, I was back in the game. Everything hurt, but a couple of paracetamol had taken the edge off and I was now able to tick down the distances in manageable distances. Six miles: I can do that. Four miles: a normal weekday run. Three miles: a parkrun....  The crowds were thickening too, and you could feel the goodwill and energy pushing you on. 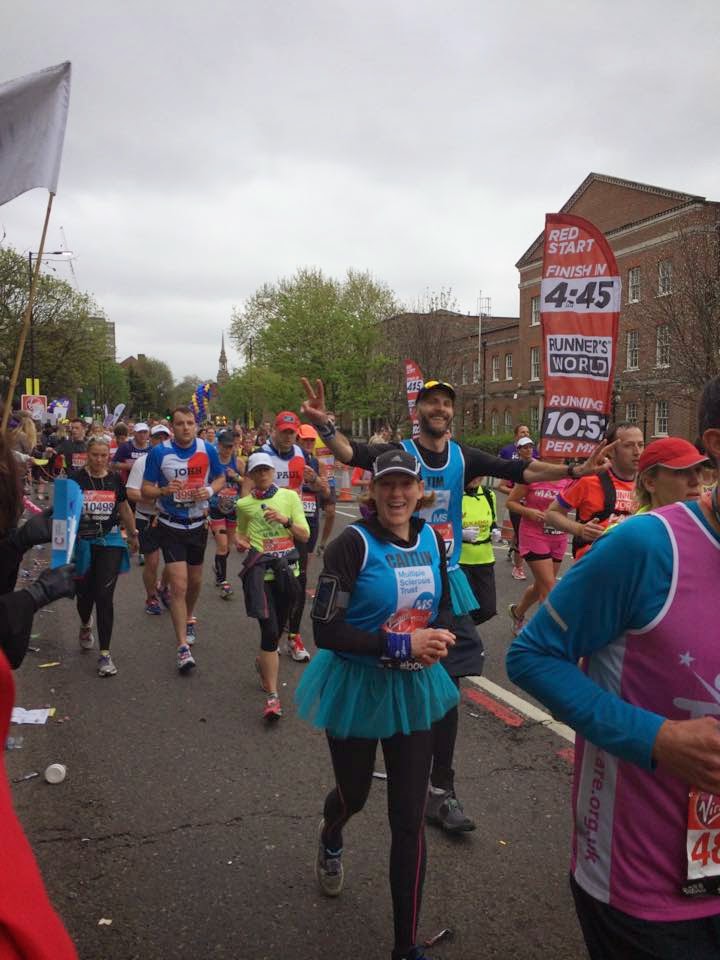 
C. was struggling by this point, her asthma starting to make it hard to catch her breath, and we were forced to slow down and occasionally to walk (although I would estimate that we walked for less than 100m of the whole 26.2 miles).  The crowd here was truly amazing, and it was around here that I began to feel slightly overwhelmed by emotion at the way people were shouting out my name and pushing me onwards over the last few miles.

C. was in a world of pain at this point and barely able to think about anything except putting one foot in front of another (she tells me that she barely remembers running past Big Ben and the Houses of Parliament at all). I was loving it: sucking up the energy from the crowd and giving them a huge, goofy smile back. POWER! YOU’VE GOT THIS, TIM!

Runners all around me were in all sorts of condition, many pulling themselves along on broken bodies, powered only by bloody-mindedness and the energy from the crowds.  We ran towards Big Ben and the Houses of Parliament, turning right to run down along the Embankment, past Buckingham Palace and finally turning onto the Mall….. 385 yards to go and then… finally… 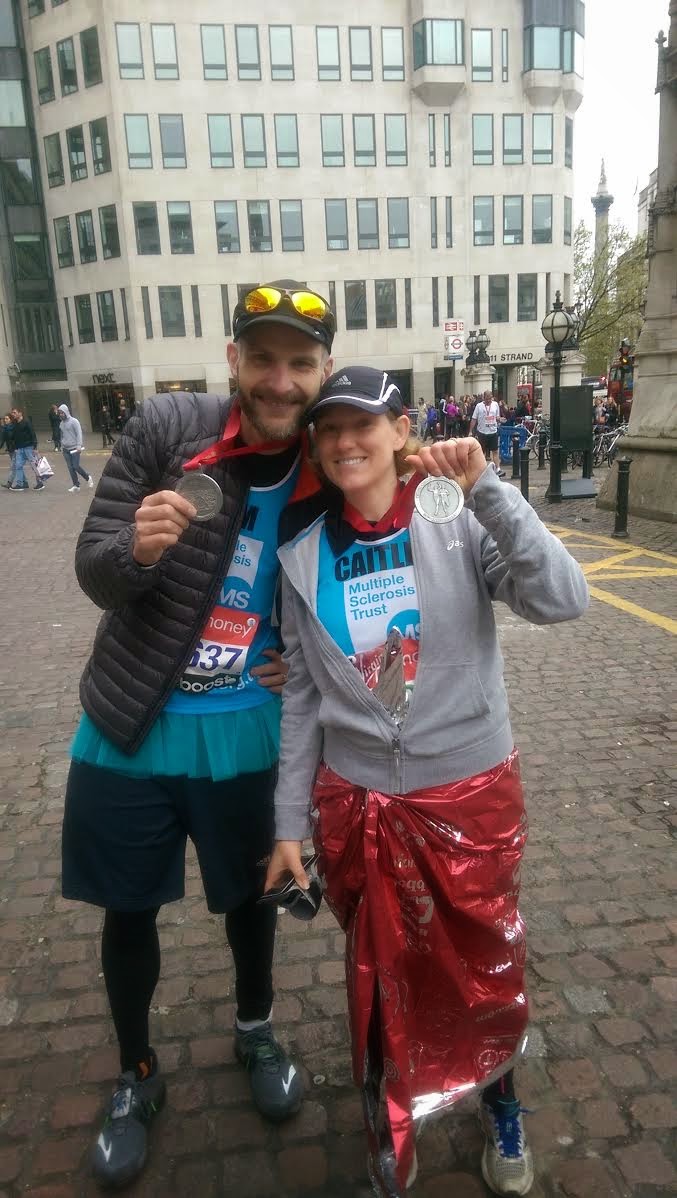 DONE.
Over.  Four months and hundreds of miles of training. Finished.  We crossed the line hand-in-hand.

We’ve raised (if you include Gift Aid) nearly £6,400 for the MS Trust. This is more than double our target and an amazing, humbling amount of money that will make a massive difference to a small charity.

Thank you. Thank you everyone for your generosity and your encouragement. 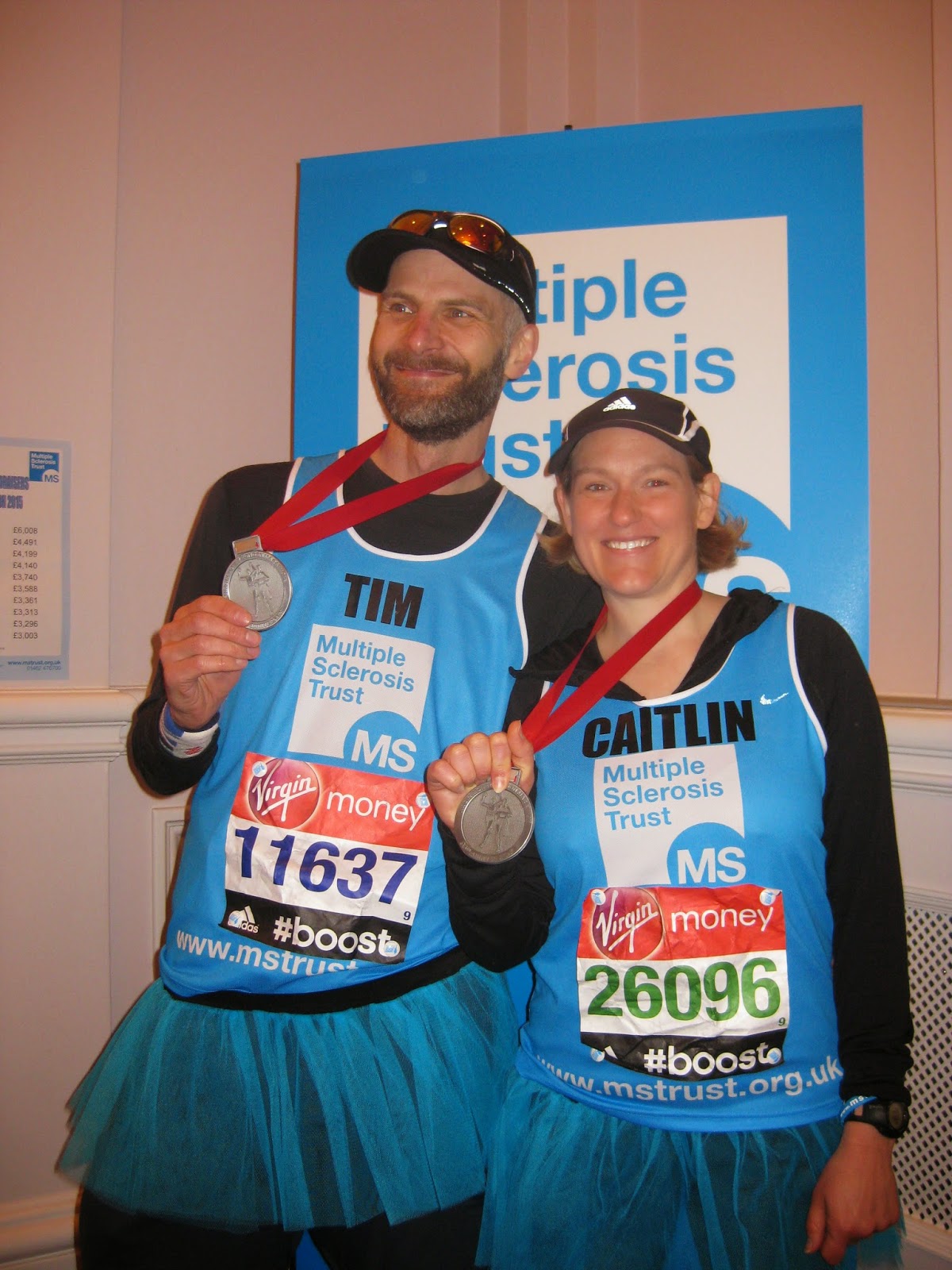 Well. Never say never.  Someone asked me that question last night and my moment of hesitation before answering told them everything they needed to know.

Email ThisBlogThis!Share to TwitterShare to FacebookShare to Pinterest
Labels: C, crazy in the coconut, exercise as therapy, MS Trust, WTs