Everything Everything @ Rock City, 11th November 2015 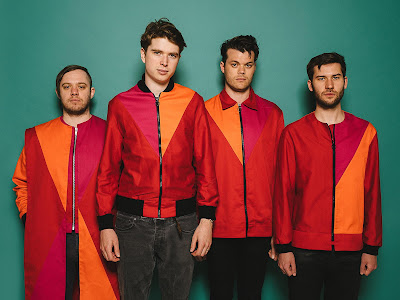 The last time I saw Everything Everything at Rock City, in October 2013, I can see that I was preoccupied by the sight of the town centre filled with drunk students in fancy dress being shepherded from venue to venue before ending up at Rock City at about 10:30. That was on a Monday night, but two years later, on a Wednesday night, I can see that things haven’t changed. I didn’t see any sober people with red clipboards ushering people around on an organised pub crawl this time around, but I did see lots of drunk students in fancy dress: from cowboys on the bus passing around a big bottle of Smirnoff (branded vodka please, darling) to a bunch of idiots in the cheapest looking lederhosen costumes you can imagine. The girls, to be fair, didn’t seem to so much be wearing a specific, bought-for-the-purpose costume as much as just wearing the shortest, tightest hot pants they could find and a vest. I know I’m getting old, but I felt cold just looking at them, even on a mild night. All of this leads me to the slightly uncomfortable realisation that students don’t just have one night of the week where they get into costume and go drinking, and that they just get into costume to go drinking every night.

I didn’t spot any fancy dress inside Rock City, but the venue was certainly packed full of the youth. Last time around, it was fairly clear that being on the 6 Music playlist had brought a small but significant portion of the audience. This time around, not so much and I was amongst the oldest people there. Damnit! People watching is always a pleasure, but tonight it was a beautiful thing to watch the youth at play. Rock City has started selling beer in two pint cups, and even the biggest guy is rendered a tiny hobbit as he clutches this ridiculous bucket full of piss-weak warm lager in both hands. I actually ordered two pints at the bar, and had to carefully explain by means of a dumb show that I meant “one pint and one pint. Two pints”.

Rock City wasn’t sold out, but it was pretty full, and the crowd was really pretty excited indeed to see the main event… which made it all the more baffling when most of them then spent the vast majority of the evening chatting to each other as the band played. To be fair, I felt the band paced their set appallingly badly, and that it sagged for a good twenty minutes in the middle, but even so…. They’re a good band and all of their albums are pretty strong, including the latest one, so I’m not quite sure why they dropped the pace so much halfway through the set. Still, the youth didn’t seem to mind, and often paused their conversations to pull out their phones to film 30 seconds of footage to load on the “My Story” bit of snapchat. Does anyone, anywhere spend their time looking through these crap video snippets of a gig? I probably sound about 100 years old, but I just don’t get it. Can’t you just enjoy what you’re watching with your eyes and ears? Be present in the room in the moment? I guess not.

The band sounded good. One of my friends has a problem with Jonathan Higgs’ falsetto live, but I think he makes it all sound pretty effortless (even if his peroxide flick hair-do is a tragic, tragic mistake). He also looks like he’s enjoying himself, which counts for a lot too. We’ve all been to too many gigs were the band look like they wish they were somewhere – anywhere – else….I’m looking at you Radiohead….. And, just as he did in 2013, Higgs told us as sincerely as he could manage that we were a great crowd, best on the tour so far… and I think he might actually have believed it to. The new album is good, and they played a lot of it, as you would expect. I’m not quite sure then why that meant the set was so uneven: the songs are good and the band sounded good, so what’s the problem? In a word: Pacing. They played the wrong songs at the wrong time and momentum gradually drifted away. They do have some glorious songs though: they tossed “Kemosabe” out early, but “Schoolin’”, “Regret”, “Don’t Try”, “Cough Cough”, “Photoshop Handsome”, “Distant Past”….. A good start and a good finish, I suppose, but the focus on the newer stuff meant that they have inevitably dropped a few of the quieter, slower-burning gems from their older albums. The new material is good, but apparently not quite as deep.

(incidentally, I want to have a dedicated button – as the keyboardist did here – that plays the phrase “distant past” every time it is pressed. Ideally accompanied by the sound of a classic Star Trek tricorder. Can you imagine how useful that would be in everyday conversation?)

So, in summary, a curate’s egg of an evening: a fascinating crowd and a band that I really like who sounded pretty good on the night, but a bumpy set. Oh, and I’ll leave you with some fashion thoughts: I’ve seen band’s wearing uniforms before, but the jackets that Everything Everything wore for the whole of the main set (grey with black trim , sort of like a Star Trek: the Next Generation jacket) just looked ill-fitting and a bit cheap. They then produced a coloured set of the same for the encore and looked even worse. Have a word with yourselves, lads! Either commit to wearing a band uniform like Django Django’s shirts and commit to it, or don’t bother! It doesn’t have to be expensive, but it shouldn’t look like it’s made from cheap fuzzy felt. They looked like they might have made them themselves, which I suppose would be charming….

Oh, hark at me. Coming on here and talking about almost anything but the actual band and generally sounding like I’m the oldest man alive. Oh wait…. I’ve always sounded like that, even when I wasn’t old. If you haven’t worked that out by now, then you’re probably in the wrong place.

Swisslet: hunting badgers by owl-light since 2004.

Encore:
No Reptiles
Distant Past
Posted by swisslet at 22:15