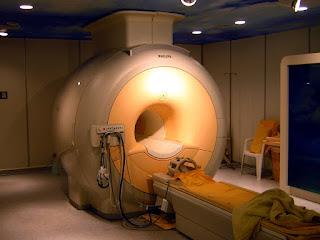 I had an MRI scan yesterday. There’s much debate about whether or not our NHS provides 24x7 cover (in my experience, it’s always been there when I’ve needed it), but I will admit to being a little surprised about having my appointment for a brain and cervical spinal cord MRI scan appointment come through for 20:10 on a Wednesday evening. I was half-expecting to get there and to find that it has been a mistake… but no, they were there and they were running ahead of schedule, so I was scanned almost as soon as I arrived. They’re busy doing appointments until 21:30, at which point they’re on call for any emergency scans that come up.

Anyway. I haven’t actually had an MRI scan since I first started displaying the early symptoms of my MS in 2005. The scans revealed one lesion (or sclerosis) in my neck, but it wasn’t clear if there were any more in my brain or elsewhere in my central nervous system. As I’m sure you’ll have worked out by now, to be clinically diagnosed as having multiple sclerosis, you need to have evidence of more than one sclerosis… and in the end, it was another 4 years before I got my definitive diagnosis as a result of a lumbar puncture and the protein banding in my spinal fluid.

I saw my MS nurse a few months ago when we needed to discuss a change in my medication. She asked me when I was last scanned, and was appalled at the answer. Just because I was doing so well, she told me, didn’t mean that my consultants shouldn’t take the trouble to look inside to see what might be going on. She sent me home with a flea in my ear to make sure I brought it up with my consultant next time I was in clinic. As it happened, I didn’t need to mention it because my consultant mentioned it to me. I’ve been injecting a disease modifying drug for 7 years now, and in that time my MS has barely progressed (by the standard measure of relapses, anyway). He wanted to do a scan to see if there was anything new to look at, otherwise he was going to recommend that they take me off the drugs. Well, I’m in two minds about that: I started injecting because, although doing nothing was a perfectly valid choice, I would far rather be doing something (that might do nothing), than to do nothing (which would definitely do nothing). I’ll be happy to stop injecting from a physical point of view, but at the same time, I’m a touch nervous that maybe, just maybe, it’s the injections that have kept me in such good condition ... it’s a tough one.

When I was scanned in 2005, it was at the MRI scanning unit of a private hospital – I was covered by health insurance at work, and before my diagnosis, all my consultations with the neurologist took place here. After diagnosis, I saw the same consultant under the NHS…. because the NHS is brilliant like that. This time around, I was scanned at the Queens Medical Centre: a real maze of a place where you can go into the building on one floor, and pop out on a different level without having taken any stairs. It’s massive, but I still think it’s a bit like the TARDIS. At the private clinic, I was told that I could bring a CD, and they piped soothing music as I was scanned. At QMC, they gave me earplugs and told me it was going to be noisy.

…even so, it was reasonably late in the day and I’d had a full day at work and a run before heading to the hospital, so I found myself gently nodding off, in spite of the noise. Well, except for….
“Are you alright in there? I’m going to start scanning your spine now”
Every couple of minutes.
Oh well. Bless her, she was lovely. Not British, Brexiteers might like to note, but skilled and prepared to work long hours late into the evening to get scans like this done with less than a 4 week wait between consultation with neurologist and appointment.
Results in a couple of weeks. It will be good to know what’s going on in there.

I’ve actually been having a bit of visual disturbance recently. It’s a very common presenting symptom of MS, and I’ve had some problems with the dilation in my right pupil for a while now, but it’s definitely a bit off at the moment. I’ve been putting off an appointment with the optician for a little while now, because there’s quite a large part of me that doesn’t want to know if there is an issue and if I might need glasses again or whatever. Today I just got over that and made an appointment.
Posted by swisslet at 20:40