ardent for some desperate glory... 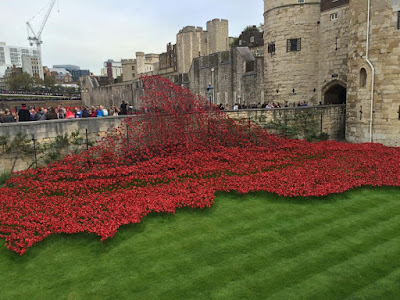 I’m conscious that I tend to only post war poetry of the “boom, boom, boom” variety. I suppose the more optimistic stuff doesn’t really fit with the view of the First World War that I’m looking to portray. When we think about “the war to end all wars”, we tend to think of the horror of the trenches and the senseless deaths of all those men walking through No Man’s Land into the machinegun fire.

“Dulce and Decorum Est” seems to be a million miles away from the romantic optimism of Rupert Brooke’s “The Soldier”. The one was written in 1914 and romanticises a soldier dying for his country; the other was written in 1917 and captures the brutal reality of trench warfare.

The Soldier, by Rupert Brooke

If I should die, think only this of me:
That there’s some corner of a foreign field
That is forever England. There shall be
In that rich earth a richer dust concealed;
A dust whom England bore, shaped, made aware,
Gave, once, her flowers to love, her ways to roam,
A body of England’s, breathing English air,
Washed by the rivers, blest by the suns of home.
And think, this heart, all evil shed away,
A pulse in the eternal mind, no less
Gives somewhere back the thoughts by England given;
Her sights and sounds; dreams happy as her day;
And laughter, learnt of friends; and gentleness,
In hearts at peace, under an English heaven.

This sentiment seems somewhat at odds with Owen’s most famous poem.

Bent double, like old beggars under sacks,
Knock-kneed, coughing like hags, we cursed through sludge,
Till on the haunting flares we turned our backs
And towards our distant rest began to trudge.
Men marched asleep. Many had lost their boots
But limped on, blood-shod. All went lame; all blind;
Drunk with fatigue; deaf even to the hoots
Of tired, outstripped Five-Nines that dropped behind.

Gas! GAS! Quick, boys! - An ecstasy of fumbling,
Fitting the clumsy helmets just in time;
But someone still was yelling out and stumbling
And flound'ring like a man in fire or lime ...
Dim, through the misty panes and thick green light,
As under a green sea, I saw him drowning.

In all my dreams, before my helpless sight,
He plunges at me, guttering, choking, drowning.

If in some smothering dreams you too could pace
Behind the wagon that we flung him in,
And watch the white eyes writhing in his face,
His hanging face, like a devil's sick of sin;
If you could hear, at every jolt, the blood
Come gargling from the froth-corrupted lungs,
Obscene as cancer, bitter as the cud
Of vile, incurable sores on innocent tongues, --
My friend, you would not tell with such high zest
To children ardent for some desperate glory,
The old lie: Dulce et decorum est Pro patria mori.

The optimism of 1914, it seems, is long dead by 1917/18.  Brooke himself died in 1915 whilst en-route to Gallipoli… perhaps not quite the heroic and glamorous death he imagined for himself: sepsis from an infected mosquito bite...but, in spite of this, he was almost immediately eulogised in England as the first poetic martyr of the war.  Winston Churchill himself even described Brooke as "all that one could wish England's noblest sons to be".

Our own views of the “Great War” are now indelibly bound up with the work of the trench poets like Owen and Siegfried Sassoon – it’s impossible to imagine that a programme like Blackadder Goes Forth - with that famous, poignant last scene of poppy fetishism - could have been made without them. Actually, optimistic poetry about the First World War was written throughout the course of the war. The trench poets tend to be the ones that we remember now, but they were very much in the minority at the time. We might find it hard to imagine when we look at what they were fighting for, but those involved didn’t like to think that they were dying for nothing and preferred to see themselves caught up in a more noble struggle; their betters knew what they were doing and wouldn’t be asking them to die for no reason, right?

Charles Carrington, a survivor of both the Somme and Passchendaele was moved to write, "Just smile and make an old soldier's wry joke when you see yourself on the television screen, agonised and woebegone, trudging from disaster to disaster, knee-deep in moral as well as physical mud, hesitant about your purpose, submissive to harsh, irrelevant discipline, mistrustful of your commanders.  Is it any use to assert that I was not like that, and my dead friends were not like that, and the old cronies I meet at reunions are not like that?"

It's funny how history can be warped over time, isn't it? What you think you know isn't ever really the way it was.

I look around at our “Help for Heroes” culture, where every soldier who has served is a hero serving their country in a just cause, and I do wonder if history has taught us anything.

You don't have to look far to see that the old lie is still very much alive and well today. Dulce et decorum est Pro patria mori.
Posted by swisslet at 21:05