bonds to the whims of murder... 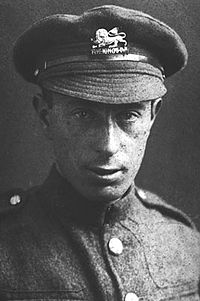 The darkness crumbles away.
It is the same old druid Time as ever,
Only a live thing leaps my hand,
A queer sardonic rat,
As I pull the parapet’s poppy
To stick behind my ear.
Droll rat, they would shoot you if they knew
Your cosmopolitan sympathies.
Now you have touched this English hand
You will do the same to a German
Soon, no doubt, if it be your pleasure
To cross the sleeping green between.
It seems you inwardly grin as you pass
Strong eyes, fine limbs, haughty athletes,
Less chanced than you for life,
Bonds to the whims of murder,
Sprawled in the bowels of the earth,
The torn fields of France.
What do you see in our eyes
At the shrieking iron and flame
Hurled through still heavens?
What quaver — what heart aghast?
Poppies whose roots are in man’s veins
Drop, and are ever dropping;
But mine in my ear is safe —
Just a little white with the dust.

Isaac Rosenberg was raised in poverty in the East End of London. Out of work in 1915 and unable to find a job, he enlisted in the army, asking that half of his pay was sent to his mother as a “separation allowance”. Rosenberg himself was opposed to the war: in a personal letter, he wrote, "I never joined the army for patriotic reasons. Nothing can justify war. I suppose we must all fight to get the trouble over."

This poem was written sometime around 1916 whilst he was serving on the Western Front, and there are definite echoes of John McCrae’s famous poem, “In Flanders Fields”:

In Flanders fields the poppies blow
Between the crosses, row on row,
That mark our place; and in the sky
The larks, still bravely singing, fly
Scarce heard amid the guns below.

We are the Dead. Short days ago
We lived, felt dawn, saw sunset glow,
Loved and were loved, and now we lie
In Flanders fields.

Take up our quarrel with the foe:
To you from failing hands we throw
The torch; be yours to hold it high.
If ye break faith with us who die
We shall not sleep, though poppies grow
In Flanders fields.

That poem was first published – with great success – in 1915. The cult of the poppy started quickly, it seemed... this poem was widely used in fund-raising drives during the war, and it’s no coincidence that the poppy was chosen as the symbol for the first Remembrance Day in 1919. It’s entirely possible that McCrae’s poem was a direct influence ‘Break of Day in the Trenches’, although for my money, Rosenberg’s poem is both more droll and more visceral in its description of the realities for an enlisted man in the trenches on the front line. Corn poppies grew abundantly in Flanders, and were some of the first plants to spring up from battle-devastated fields. They were not mere symbols to either McCrae or to Rosenberg, who will have seen them growing in the ruins of no-man’s-land; a flash of beauty amidst the ruins and the death. The poppy's association with death goes back ages farther than the Great War. Opium poppies were found in Egyptian tombs. The Sumerians called it "the flower of joy" and the Greeks associated it with fertility…. symbolism that the poet is aware of, even if today’s poppy police decidedly are not.

In March 1918, the German Army started its Spring offensive on the Western Front. After being sent back to the front to reinforce the line against the enemy assault, Rosenberg was killed on the night of the April 1, either at the hands of a sniper or in close combat. He was buried in a mass grave.

A rat ran under the tyres of my bike on Monday night. Whether he was queer or sardonic, I don't know.  I think I broke his back and killed him instantly, but seeing his white belly facing the sky on the cycle path behind me made me feel quite sad.
Posted by swisslet at 21:41