the hell where youth and laughter go... 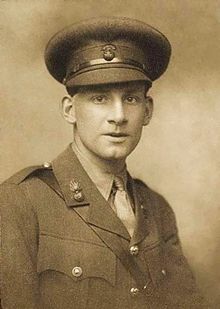 Suicide in the Trenches

I knew a simple soldier boy
Who grinned at life in empty joy,
Slept soundly through the lonesome dark,
And whistled early with the lark.

In winter trenches, cowed and glum,
With crumps and lice and lack of rum,
He put a bullet through his brain.
No one spoke of him again.

You smug-faced crowds with kindling eye
Who cheer when soldier lads march by,
Sneak home and pray you'll never know
The hell where youth and laughter go.

One of our greatest war poets, Sassoon was an officer who was decorated for bravery on the Western Front. His poetry both described the horrors of the trenches, and satirised the patriotic pretensions of those who he felt were responsible for a jingoism-fuelled war. Sassoon became a focal point for dissent within the armed forces when he made a lone protest against the continuation of the war in his "Soldier's Declaration" of 1917, which saw him being admitter to a military psychiatric hospital. [cribbed from his wiki entry]

Here's that declaration in full:

I am making this statement as an act of wilful defiance of military authority because I believe that the war is being deliberately prolonged by those who have the power to end it. I am a soldier, convinced that I am acting on behalf of soldiers. I believe that the war upon which I entered as a war of defence and liberation has now become a war of aggression and conquest. I believe that the purposes for which I and my fellow soldiers entered upon this war should have been so clearly stated as to have made it impossible to change them and that had this been done the objects which actuated us would now be attainable by negotiation.

I have seen and endured the sufferings of the troops and I can no longer be a party to prolonging these sufferings for ends which I believe to be evil and unjust. I am not protesting against the conduct of the war, but against the political errors and insincerities for which the fighting men are being sacrificed.

On behalf of those who are suffering now, I make this protest against the deception which is being practised upon them; also I believe it may help to destroy the callous complacency with which the majority of those at home regard the continuance of agonies which they do not share and which they have not enough imagination to realise.

Sassoon himself was pretty far from being a coward - he was a war hero known to fellow soldiers as “Mad Jack” because of his persistent practice of venturing into no-man’s-land to raid the German trenches by night, crawling through the barbed wire, revolver in one hand, knobkerrie in the other, and three hand grenades in each pocket, apparently not caring whether he got back alive.

During the Battle of the Somme, he had charged a German trench single-handed, down a slope, across a railway line, and up the opposite bank: the Germans thought it was a mass attack and fled. He won the Military Cross for rescuing a wounded man under heavy German fire, and was recommended for other awards. He was in England to write that letter because a German sniper’s bullet had hit him in the shoulder, missing his jugular vein and his spine by a fraction of an inch. He was prescribed treatment at a convalescent home at Craiglockhart, near Edinburgh, and it was here that he first formed a friendship with an admiring Wilfred Owen.

Sassoon returned to the front, but in July 1918, as he was returning from another of his dangerous excursions into no-man’s-land, when he decided to savour the dawn of a beautiful summer’s day by removing his helmet and standing up to gaze at the horizon. He was shot by a British sentry who mistook him for a German; but with his usual luck, he survived, and lived to be 80.

What an incredible man and what a poet.

But why would we bother to listen to the testimony of those who actually fight our wars, eh? We might actually learn something. Let's just call them all heroes and keep sending them off to die anyway.
Posted by swisslet at 20:33