and all our plans are useless indeed... 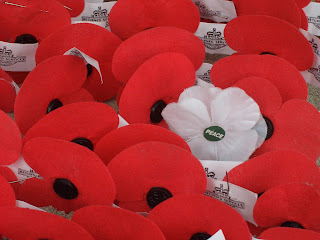 Facebook reminded me this morning that, exactly one year ago today I was posting about the poppy and was angry about how this symbol of quiet contemplation and reflection had been hijacked and was becoming a symbol of something else entirely.  Instead of getting angry about this all over again this year, I'm just going to post some achingly sad war poetry instead.  I'm tired of being angry about this and I just want to try and spend the next few days thinking about the sacrifices people have made in war instead.

Today's poem is a monologue in which one soldier speaks to the fiancé or girlfriend of a dead soldier of his death— mourning his loss and regretting that he will never have the pleasure of his friend’s company again.  The consoling beauty of the English countryside clearly isn't enough to forget the horrific memory of the bloody and maimed body of his friend.

Ivor Gurney led a somewhat tragic life: he enlisted in 1915 and was shot and later gassed (at Ypres) whilst serving on the front.  He suffered a serious mental breakdown in 1918 and spent the last 15 years of his life in psychiatric hospitals before dying of TB in 1937 at the age of only 47.  Another person whose life was irreversibly shattered by war.

To his love, by Ivor Gurney

He’s gone, and all our plans
Are useless indeed.
We’ll walk no more on Cotswolds
Where the sheep feed
Quietly and take no heed.

His body that was so quick
Is not as you
Knew it, on Severn River
Under the blue
Driving our small boat through.

You would not know him now…
But still he died
Nobly, so cover him over
With violets of pride
Purple from Severn side.

Cover him, cover him soon!
And with thick-set
Masses of memoried flowers-
Hide that red wet
Thing I must somehow forget.

Gurney is one of 16 Great War Poets commemorated on a slate stone unveiled in Westminster Abbey's Poet's Corner. The inscription on the stone was written by Wilfred Owen. It reads: "My subject is War, and the pity of War. The Poetry is in the pity."

I think that sums it up rather well.

As Harry Patch often said, "War is organised murder, and nothing else".  We should be asking more questions about the wars we fight and the impact that they have on ordinary people, soldiers and civilians alike.