Over the last couple of years, my MS has been steadily getting worse.

Every time I sit down to write about this, I always seems to fall into a kind of relentless optimism. Perhaps this is a defence mechanism, but I think it's actually how I feel most of the time. As I've said many times before, I honestly don't see the point in wasting my time and my emotional energy railing against something that I'm not going to be able to change. It is what it is. No one knows where this is going, and sitting down and crying about it simply isn't going to achieve anything.

Of course, that's not to say that I sometimes don't feel like crying about it...

On my last visit to the neurologist, I was told that I was a shining example of acceptance of my diagnosis. I think this is because I acknowledge that I have multiple sclerosis and that my disease is progressing, but I try not to let this get in the way of going about my business the best I can.

I suppose this is best illustrated in my running. I ran a bit before my diagnosis, but for whatever reason, started taking it a lot more seriously afterwards. I've run six marathons and countless other events since. My MS has weakened my left side and my left ankle is slowly losing its flexibility. This makes running harder, but thanks to the support of my MS team, I have been able to keep running using a series of different strategies, insoles and orthotic devices. The most recent of these is a pretty snazzy piece of kit that adds some spring-back into my ankle and seems to have stopped me from falling over. 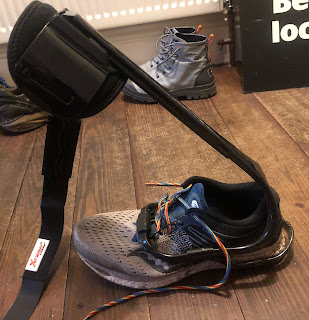 Before this, I was falling over so often whilst running that I was beginning to cause myself some real damage. This brace works well enough that I've been able to go out running without wearing the wrist guards and kneepads.

Even so, I'm basically fighting a losing battle.

A consulant surgeon who specialises in sport (and who is a runner himself) told me about ten years ago that it probably wouldn't be my MS that ultimately stopped me from running; it was likely to be as a result of some of the compromises my body was being forced to make to compensate for weakness elsewhere. It seems that is likely to be the case for me. As well as the creeping stiffness in my ankle and the muscles of my leg, I'm told that the weakness in my left hip now means that my running gait has changed. Apparently, instead of driving my left leg through my running stride normally, I now "throw" it in front of myself because I lack the fine muscle control required.

Running is hard and has got a lot harder over the last couple of years. My last marathon was in April 2019, and it now feels unrealistic to think that I could put my body through that kind of a distance, never mind the hundreds of miles of training. Perhaps more importantly, I'm not sure I have the kind of determination you need. Instead, I've found a joy in just being out and running at all. I can't run as far or as fast as I did before. Usually, at this time of the year, I'd be out with my club taking part in a local series of cross country runs. I've never been very quick, but they're very inclusive events and they are a lot of fun to run. There's a certain joy, I've discovered, in the mud and the hills. This year, I've sat them out. I just don't think it's realistic to put my body through that kind of stress and I'm just not confident that I'm strong enough to pick up my left leg over that kind of terrain for a 10km race.

All these things make me feel a bit sad, but I'm also determined to continue to focus on what I can do, rather than to dwell too much on the things I might have lost.

I suppose this is what my neurologist means by acceptance.

He also told me that my MS progression was quite unusual: it is not at all normal for patients this far after their diagnosis to be as fit and healthy as I am (my first symptoms were in 2005 and my diagnosis was in 2009). This is obviously good, but it's also a bit depressing. Yes, I've been lucky, but I suddenly have a real sense that the sand is running out of my timer.

Over the last two years, my condition has progressed. I haven't really developed any new symptoms, but the symptoms I do have are getting worse and are affecting me much more in my daily life. I take drugs to help manage my bladder urges and I self-catheterise every night. I also take muscle relaxants to try and control the muscle spasms in my legs that have woken me up at night for a little while, but are now starting to affect the way that I walk and even make it hard for me to sit still in the evening. I walk stiffly and can feel that I swing my legs from the hip as I walk because I tire easily and don't have the strength to drive them through normally. I wouldn't be all that surprised if I needed to walk with a stick at some point in the relatively near future (I actually find walking a lot harder than running).

I am relentlessly positive about these changes, but that doesn't mean that they aren't on my mind. I am really disciplined about not allowing myself to wallow in where this journey might end. No one knows the answer to that one, whether they have MS or not. But.... it does make me a little bit sad.

I reckon I'm pretty strong and resilient, on the whole and maybe I am a shining example of disease acceptance...but these changes are still a lot to take in.