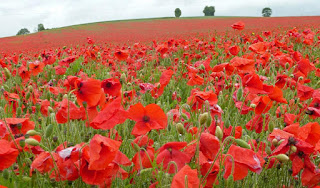 We're barely into November and it's started again already.. the achingly predictable series of manufactured controversies over the wearing or the not wearing of a poppy.  It's tiresome, and I'm bored both of watching the tedious value signalling and of talking about it.

The final straw for me this year - already - was watching the Prime Minister of this country, standing in the debating chamber of the Commons, in the Houses of Parliament and the heart of the political life of this nation, surrounded by elected representatives, claiming that the poppy wasn't a political symbol.

Really?  I don't think it gets much more political than that.

Instead of getting angry about it, I've decided just to skip to what I usually end up doing around Remembrance Day every year anyway: I'm going to focus on some of the tremendously moving war poetry that I like to read as I remember the sacrifices that other people have made over the years.  I find this time of year very moving, and it feels more important than ever that we keep remembering now that the living witnesses of the two World Wars are no longer with us.  Did you hear anyone during the recent referendum debates glibly taking peace in Europe for granted?  I know that I did.

Anyway.  I'm going to share some of that poetry.

Let's start with some Rudyard Kipling.

Kipling wrote this poem after his son John (called Jack), an 18-year-old Lieutenant in the 2nd Battalion, Irish Guards disappeared in September 1915 during the Battle of Loos, during World War I (this was also the first battle where British units deployed poison gas against the enemy).

"Oh, dear, what comfort can I find?"
None this tide,
Nor any tide,
Except he did not shame his kind---
Not even with that wind blowing, and that tide.

Then hold your head up all the more,
This tide,
And every tide;
Because he was the son you bore,
And gave to that wind blowing and that tide.